Skiing with a view to one of the largest volcanoes in the province of Neuquén, the Lanin volcano and taking the Andes and Lake Lacar as witnesses, is one of the many tastes that can have Cerro Chapelco's visitors.

Chapelco in Agosto with the Lanín Volcano in the background. Photo courtesy of Roberto from Patagonia.com.ar photo album

Chapelco offers a padded surface for skiing as it is a hill without stones, with plenty of beautiful lawns and surrounded by native lenga forests. This ski area free of rocks makes it possible to enjoy the slopes even in light snow.
Chapelco has 31 ski slopes of varying difficulty, making the center offers alternatives for all levels. Beginners can ski at the base or the Pista 63 and the bravest can slide down the black slopes, the bumps and jumps.

For snowboard lovers the winter resort has a Snowboard Park where they made windscreen to keep the snow, especially designed for practice and competition of different modalities such as parallel slalom, half pipe, fun park and go biga.

As for the slopes, the maximum is 45 º and the minimum 20 º. The summit is at 1980 meters and the ski area is 140 hectares with a vertical drop (not cumulative) of 730 meters. From the top of the quadruple chairlift of the Mallin to the base, the maximum length is 5.3 km. Another possibility is down from the top of the Poma del Filo and Pioneros in 3.4 km.

Chapelco also boasts of good and abundant snow during "peak" of winter. The snowy precipitation annual basis is 1.50 meters and 2.50 meters at the summit, while the average snow depth is 0.50 meters. At the base, 1 meter in intermediate and 1.30 meters at the top. Experts can enjoy the speed off-piste, sink and float in the snow.

The center has a capacity to transport 11,718 people per hour, skiers can navigate the hill using their magnetic cards called snow pass. Eleven lifts expedite the transfer of the skiers. The cabins, comfortable and warm in five minutes can reach 1600 platform, area of secure ​​snow all winter. A cabin, five lifts (two doubles, one triple, two quad) and five drive means cover the entire area.

Chapelco has a ski school recognised internationally, with its 20 years of experience in teaching the sport with a team of professors at the highest European level. In that school they teach the various disciplines of skiing:

For those who do not want to ski there are rides with sled dogs or for more speed on snowmobiles.

How to get there?

Leaving the city of San Martín (1600 miles distant and an hour and a half flight from Buenos Aires), take the National Route No. 234 which skirts the Lake Lácar. You cover 16 km paved, joining left to Provincial Highway No. 19 and after a journey of 5 km along this gravel route leads to the base of the hill.

Note:
- The loss, breakage or damage to the chip card will cost recharge / reset.
- People with disabilities (presenting certificate of disability) can have the Pass free of charge, just pay the daily insurance.
- The college students must present current documentation that proves itself (book, cert. Free debt, cert. Regular student, etc).
- When a subscription covers 2 seasons will be charged proportionately.
- Rates subject to change without notice, denominated in pesos. 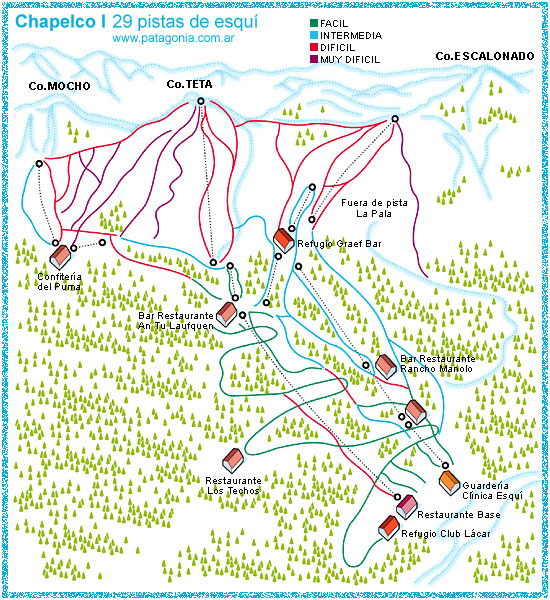