In Chapelco there is a new service, snowshoeing an activity that is growing every day in different ski resorts in Patagonia. 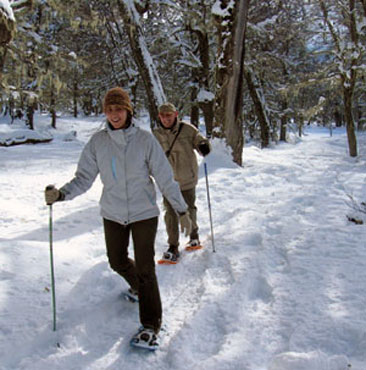 Snowshoeing is one of the activities you can enjoy in Chapelco.

This activity quickly captured public attention, both for pedestrians and skiers themselves. It is the easiest snow sport to learn. Due to low impact on joints, is highly recommended for any age and condition.

This new alternative is to give tourists the chance to tour the lenga forests in a very different way from which is allow skiing and snowboarding. Snowshoeing was the first man used to travel by snow.

Moving away from the coffee shops, slopes and lifts enable us to explore the forest by moving to a totally different world, where only the sound of our footsteps crushing the snow is heard. Nature in its purest form around the walkers and the eyes are not enough to admire her beauty.

From Platform 1600 (from Siberian dogs cabins) starts a walk of 1 hour 30 minutes to the igloo in the forest. You go through lenga forests through water meadows and frozen streams to reach a real igloo where we enjoy a few "mates" or good liquor, according to taste.

From 1600 to the base walking for 1 hour and 30 minutes. Decline from 1600, going through different parts of the Andean forest and experiencing the changes in vegetation between lengas, ñires and undergrowth of cane to reach the base.

From 1600 platform, take the lifts to the summit and there starts the walk to Laguna Verde. The walk last the entire day and includes boots, poles, snowshoes, crampons and ice axes (as required) and packed lunch.

Able to make a real winter trekking through virgin snow on the mountainside, crossing inhospitable valleys and iced waterfalls up to one of the few lakes that remain frozen throughout the winter.

An ancient practice that attracts and amuses

Although the sport of snowshoeing is new, the origins of this practice dates back to antiquity, but it is early twentieth century in North America where it became popular, especially in the United States and Canada.

In those countries where in some areas have large amounts of snow throughout the year, the rackets were the most commonly used to travel by explorers, hunters and trappers. The need to cover long distances over very deep snow led to these intrepid settlers to use a type of rackets of large dimensions, despite being more difficult to handle, they provided more security to avoid sinking into the snow.

However, among the inhabitants of the countries of northern Europe always has been a longer tradition of using skis, telemark for first and later Nordic and alpine. Thus, the use of the rackets on the European continent is relatively modern but in Alpine countries, mostly in France and Italy have been widely accepted.

The rackets used in Europe are basically for sports and are therefore smaller dimensions.