In San Martin de los Andes you can do at any time of year a city tour aboard a double-decker English bus, the Red Bus. The tour last one hour and a half and goes through the city and its surroundings. 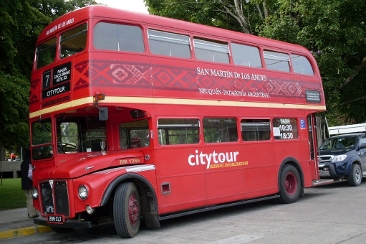 The red bus runs 25 km through the main tourist attraction of the city. Starts in the main square on Avenida San Martin along National Route 234 to the Vega Maipú with the aim of showing the urban growth in recent years. Back to the city guides will release historical architectural and cultural data and then reach the shores of Lake Lácar. Going up the Cuesta Juez Quiroga tour comes to the former Hotel Sol de los Andes from which the view is stunning, an unforgettable postcard of the city, mountains and lake. Then runs 5 km along the route "Siete Lagos" up to the Paihuen cabins where a novel was released in 1996, "Alen, luz de luna" starring Gustavo Bermudez. The city tour ends at the point of departure, the Plaza San Martín.

The vehicle is of English origin Routemaster model with it characteristic double decker. Before coming to the city was in the Automobile Museum of Buenos Aires.