The city of Trelew is located in the Department Rawson at 43º 14' south latitude and 65º 19' west longitude. At a height of 11 meters above sea level in the area called "Lower Valley of Chubut River" (VIRCH) with a total area of ​​249 km2 of city and 16 km2 urbanized, the city of Trelew is the second largest of the province after Comodoro Rivadavia. 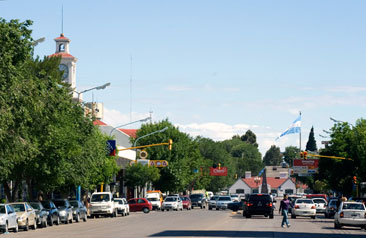 It's desert, with very low rainfall, high brightness and evaporation, and annual temperature ranges marked. Rainfall rarely exceeds 200 mm per year and its distribution throughout the year does not define any workstation as typically rainy. The maximum temperature ranges from 40 degrees Celsius and minimum 10 degrees below zero.

The town of Trelew has a record of 114,333 inhabitants according to the 2001 national census. In terms of age composition and sex, it showed a greater number of young people in the region with the national average. The sex ratio in the region is by halves.

The spatial dynamics generates the appearance of distinct settlements. One is that of urban migrants who come from various parts of the country, another group is the rural migrants gradually form a large string of new neighborhoods, and foreign residents, mostly from neighboring countries, representing approximately 8% of the population.

It's worthtly noting that Trelew is a city that presents the highest population levels in the Northeast province. It has around a set of cities which formed a conglomerate population representing 46% of the total provincial population.

Paleontological Museum Egidio Feruglio: the most important of South America Paleontological Museum Egidio Feruglio is a beautiful and impressive architectural space with showrooms showcasing the different geological eras and dinosaur fossils of Patagonia.
A Short history of Trelew Designed as the head of the rail to transport the production of the lower valley of the Chubut River to the port, Trelew was born with the growth of Patagonia.
Trelew: it production In Trelew meet several economic forces that are described in this report by the Municipality of the city.
Tea time, a trip to the past Being populated by people of Welsh origin, Trelew offers visitors the opportunity to enjoy a traditional Welsh tea accompanied by many delicacies.
Agroturism in Trelew 2Trelew offers something new; Agorturism: a day in the fields experiencing the production and acitivdades that are traditional in this region of Patagonia.
Trelew starting point to see the giant Southern Right Whale Trelew is a starting point for whale watching, to see the Southern Right Whale from Puerto Piramides, a few kilometers away.
Bird Watching in Trelew Ornithology, or bird watching is big in Trelew. Ducks, black-necked swans, swans coscoroba and pink flamingos can be observed and photographed.
Eisteddfod, a traditional festival The Eisteddfod is one of the most characteristic festivities of the Welsh people and their descendants celebrate it in Patagonia, in the city of Trelew.
Youth Eisteddfod One of the most important art expressions of Chubut is the Youth Eisteddfod, held in the month of September in Gaiman.
Tour of the Valley of Cycling in Trelew The newspaper El Chubut of Trelew organizes an annual cycling race which joins the lower valley of Chubut River with the presence of more than 100 runners.
See all Articles