The Coast Road and La Lobería from Viedma See map

Throughout the tour of a consolidated road, known as "Coastal Road", which borders the Atlantic you can see the different scenarios that nature offers.

Continuing along Provincial Route 1 from Viedma bordering the Negro River and then the sea, 30 kilometers from the resort El Cóndor is La Lobería. The resort itself has a parking lot, confectionery and restaurant, camping with stoves, supplies and semi-public telephone service.

This succession of small beaches with huge cliffs can be accessed by a staircase of cement through a cable car to transport people and items of beach. Among the abundant sand emerge restingas at low tide that allow you to enjoy gentle swimming in their natural pools. 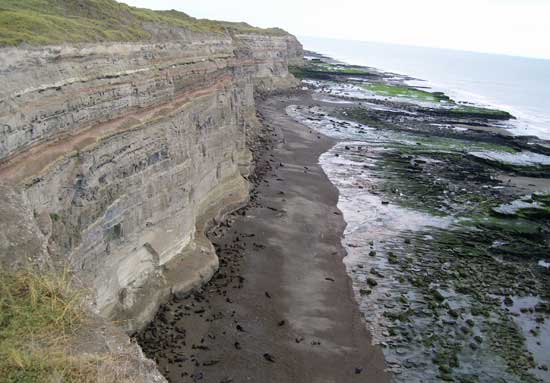 View of the colony of sea lions at Punta Bermeja within 63 kilometers of Viedma. Photo courtesy of Roberto, photo album Patagonia.com.ar

Just 3 kilometers from the resort La Loberia you find the first colony of sea lions of a hair in Patagonia and one of the largest in the world. This nature reserve inhabited by more than 4,000 sea lions has excellent viewpoints and a wide boardwalk which guarantee visitors a privileged place in the observation of this vast colony.

This natural spectacle is enhanced by the high concentration of swallows and barranquero parrots nesting in Patagonian cliffs.

The reserve has a Wildlife Interpretation Centre and it can be visited throughout the year. In specific periods, from the scenic lookouts you can see orcas, right whales and the special commerson's dolphins.

At 15 kilometers from La Lobería and limited by low dunes, it is Rosas Bay. It is a beach that still reveals the remains of the Chilean steam Ludovico, shipwreck of 1916. The depth of its waters makes this beach an excellent place for inshore fishing of sharks, dogfish, silverside, sea bass, rooster fish, elephant fish, etc.

A little over 20 kilometers away it is the "Descent of Echandi", carved into the stone cliffs as beach access, ideal for fishing silverside.

Following the tour, and already 100 kilometers of El Cóndor, cliffs lose height and alternate with sand dunes bordering wide sandy beaches. The beauty and tranquility of this place attracted Viedma and Patagones neighbors who built some houses for the weekend. In this settlement it is also the Fishermen Club, with grills, fresh water and toilets and a few kilometers a country house that provides food and radio with emergency service. Throughout the tour you can enjoy an amazing variety of fauna of the coast of Patagonia.

Only 14 kilometers from Cheek Bay it is Caleta de los Loros. Sandy beach surrounded by dunes with natural channels of varying depth where the sea enters.

In this Protected Natural Area it can be seen black-necked swans, flamingos, bivalves, octopus and other marine species. In addition, fishermen will find silverside, mullet, sea bass and flounder among other varieties.

Diving enthusiasts come to La Caleta in search of the remains of Mary Jane, buried at the end of last century, and for the extraction of bivalve and mollusks.

In an extensive fine sand beach near La Caleta it is the beach resort Punta Mejillón, called Pozo Salado, which is chosen by the campers who love nature. Here too there is a settlement house weekend, that has with grocery and public restrooms. The landscape is enhanced by the reappearance of the cliffs that shelter a small colony of sea lions.

Río Negro International Regatta The Río Negro International Regatta involves a distance of 6 stages with two breaks, starting in the capital of the province of Neuquén and ending in the beach resort of Viedma, the capital city of Río Negro.
Sea lions and unique beaches in Punta Bermeja From Viedma you can visit Punta Bermeja one of the larges sea lion colonies in the world.
San Blas Bay - Del Jabalí Island San Blas Bay, near Viedma, is a haven for fishermen, but also for those seeking peace when taking a vacation.
A visit to Viedma's farms In Viedma you can learn all about the fruit production in the area, an interesting program for those who come to this region of Patagonia.
Bruce the englishman and a life at sea The story of an Englishman who knows all the secrets of the sea and fishing. He lives in San Blas Bay, 100 km from Viedma.
Old quarter of Patagones: a pleasant stroll through the past Take a tour of the city of Carmen de Patagones and see its historic buildings, some over 200 years old.
San Blas Bay: a fisherman's paradise. San Blas Bay, 100 km from Viedma, is without a doubt one of the best places for fishing in Patagonia.
The Patagones-Viedma water race. The Patagones-Viedma is a water festival that includes several disciplines, including the second stage of the Grand Prix of International Swimming and High Diving demonstrations.
See all Articles