Punta Bermeja, a place known as "La Lobería" is a privileged place within the four hundred kilometers of the Beaches of Patagonia's Corridor, which passes between the mouths of the rivers Negro and Chubut. Located sixty kilometers from the city of Viedma, you come to the area through the "Route of the Cliffs" (Provincial Route 1). 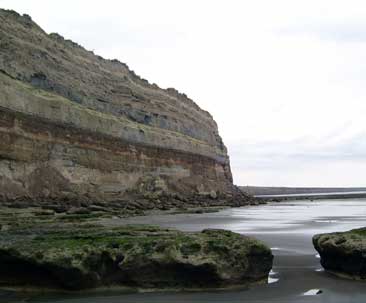 The region has an attractive pebble beach surrounded by the imposing frame of the cliffs and a special fauna reserve. In this place of undoubted attraction becuase of being the first colony of sea lions in Patagonia, walkways have been installed with balconies overlooking the high cliffs from which you can see the large colony of sea lions, one of the largest in the world.

This beach area is closed to access for tourists to protect men and sea lions. There is also a Wildlife Interpretation Centre where you can learn details about the life of sea lions and other representatives of the fauna of the region through stuffed animals, pictures and audio.

Punta Bermeja has been declared a Provincial Tourist Reserve, so it has a comprehensive security regime that includes a ranger service and an environmental education program.

But also, just three kilometers before you can enjoy a resort with special features, as the sea has eroded the rocks so that they formed a series of natural pools that are exposed at low tide and delight those looking for a dip.

At the top of the cliff there are services confectionery, grocery, healthcare, parking and camping facilities. To descend to the beach you can make use of a stepped ramp or use a mechanical means of lifting.

Lovers also can blunt the defect rods with a range of fin fish (silverside, sea bass and black bream, whiting, conger eel) and those who want something stronger can make ten kilometers along a gravel road to Rosas Bay, where you can try shark fishing from the shore.

Kings of the place

With their imposing figure, reaching three meters in length and rise up to one meter and a half above the ground, sea lions are the kings of the place. They are also called sea lions of a hair or southern sea lion, in contrast to the clumsiness with which they operate on land, these seals have a great ease and grace to move in the aquatic environment.

As for sea and shore birds are commonly seen from large animals such as giant petrels, that with its more than two meters wingspan flies in autumn and winter the beaches looking for food, to even the small flocks of Burrowing parrots that remain all year in the area.

Between these extremes, the Antartica dove make its appearance (natural charge of cleaning the blinds at the time of calving of sea lions), gulls, cormorants and neotropic cormorants.

It can also be seen occasionally in La Loberia the appearance of orcas and any right whale.

Río Negro International Regatta The Río Negro International Regatta involves a distance of 6 stages with two breaks, starting in the capital of the province of Neuquén and ending in the beach resort of Viedma, the capital city of Río Negro.
The Coast Road and La Lobería from Viedma The coast road of Viedma is a path the follows the river bank and then the Atlantic Ocean shore, connecting points of great interest.
San Blas Bay - Del Jabalí Island San Blas Bay, near Viedma, is a haven for fishermen, but also for those seeking peace when taking a vacation.
A visit to Viedma's farms In Viedma you can learn all about the fruit production in the area, an interesting program for those who come to this region of Patagonia.
Bruce the englishman and a life at sea The story of an Englishman who knows all the secrets of the sea and fishing. He lives in San Blas Bay, 100 km from Viedma.
Old quarter of Patagones: a pleasant stroll through the past Take a tour of the city of Carmen de Patagones and see its historic buildings, some over 200 years old.
San Blas Bay: a fisherman's paradise. San Blas Bay, 100 km from Viedma, is without a doubt one of the best places for fishing in Patagonia.
The Patagones-Viedma water race. The Patagones-Viedma is a water festival that includes several disciplines, including the second stage of the Grand Prix of International Swimming and High Diving demonstrations.
See all Articles