Its foundation is recognized on October 20, 1915, although it was founded in February 1884 when early settlers started to arrive to the fort Paso de los Andes.

Aluminé is a town of 5,800 inhabitants, according to estimated data to September 2006, steep streets and quaint that with Zapala form Pehuenia Zone. This area owes its name to the dominant presence of Pehuen that gives the landscape its distinctive appearance. 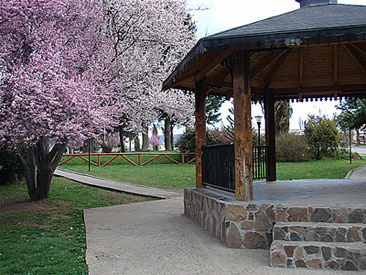 Undoubtedly Aluminé has diversity of landscapes. Located in an area of ​​mountains, lakes, clear and blue streams attached to this vegetation, in addition to meadows, forests of pine and beautiful viewpoints. The weather is humid temperate Andean west rainfall decreasing markedly towards the east.

Located at 910 meters above sea level and about 284 kilometers west of Neuquén province, close to the north of the Lanin National Park.

You can reach the town:

Like any town, Aluminé has the Anniversary Party every October 20, which hosts events and activities such as equestrian skills, folklore, exhibitions of photographs, craft, exhibition of tae kwondo, and samples of schools among others. It is traditional on this date the marathon and the anniversary dance in which takes place the election of the queen of the city. 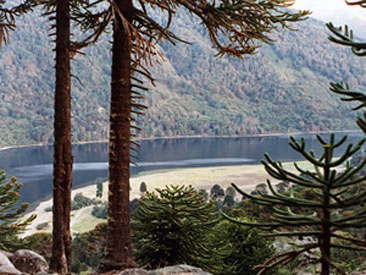 The Provincial Pehuén Festival is also celebrated in Aluminé the since 1988, which is an annual exhibition of regional products serves to show each production in an admirable landscape that worth a visit. This event honors the Pehuén, an ancient tree unique in the world, being a privileged area with as much pehuenes reaching 30 to 40 meters and a diameter of approximately 2.20 meters.

The week of the Festival culminates with the horse parade with the participation of the neighboring areas and at night there is a folklore performances, the choice of Maleen Pehuén and the Pichi Maleen Pehuén and Mrs. Maria Antonieta Panillan de Aigo, a member of the Aigo Ruca of Ruca Choroy Mapuche Association intones the Hymn to Pehuén which reads:

And its translation means: 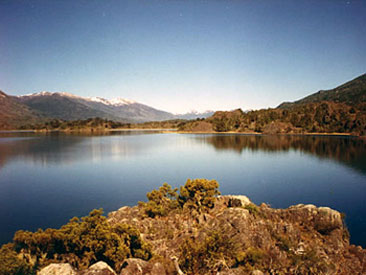 You can enjoy the rivers and lakes in the area.

Pehuenia: the land of the Araucaria Villa Pehuenia, Aluminé and Zapala are the major cities that make up the Pehuenia Region. There you can enjoy valleys, forests and lakes. Fishing and rafting are Among the highlights activities you can do.
Rock Paintings, a great heritage Rock paintings can be found in the province of Neuquén as part of the pre-Columbian artistic heritage of great cultural value.
Kayaking in Aluminé: feel the adrenaline Aluminé is an ideal place for kayaking and rafting in the Ruca Choroi river, privileged by its rapids and difficulties in navigation.
Sports and recreation in Aluminé In Aluminé you can enjoy different sports and recreational activities such as rafting, kayaking, fishing, horseback riding and trekking.
Tourists circuits from Aluminé You can travel three tourist circuits to explore the region. In most cases, you must have a vehicle to travel the large distances.
Provincial Pehuén Festival Aluminé gets prepared every year for the Provincial Pehuén Festival filled with an extensive program of activities and entertainment for the whole family.
Fishing in Aluminé The Aluminé river and the lakes Ruca Choroi and Quillén are ideal for fishing in Patagonia.
River Festival in Aluminé In January Aluminé celebrated the River Festival in honor of the watercourse which gives its name to the town.
Bird watching in Aluminé Bird watching is one of the new activities that can be enjoyed in Aluminé. Spring is the best season for bird watching in this section of Patagonia.
See all Articles