A circuit that few fail to do. Beautiful viewpointsl, strange rock formations and dense forests are among the attractions that keep its 248 kilometers.

The starting point is Bariloche, but it can also be Villa La Angostura. To leave Bariloche you have to take National Route 237 and after 15 km you cross the bridge over the Limay River, the border between the provinces of Río Negro and Neuquén. Arriving at Rincón Chico you start to board the Limay River until Rincón Grande and the Anfiteatro, a place of a spectacular natural formation.

Almost constantly accompanied by the Limay River, Route 237 crosses attractive places until it gets Valle Encantado (58 km from Bariloche approximately). There you can see strange rocks shapes which have received designations as El Dedo de Dios, Centinela, Tren Expreso, etc.

Some kilometers from the valley you get to Confluencia, which was named for being there the place of junction of the Limay and Traful rivers, now missing for the formation of a new dam lake Alicura.

Before crossing the bridge you have to turn left on Route Provintial 65, on the south bank of Traful river. The landscape is initially the same strange rock formations of the Valle Encantado, but Cuyín Manzano at only 5 km, justifies a deviation of only 500 meters to the left to see the encasing the river slopes.

The picturesque bridge over the Minero River is one of the attractions found in the 25 km you travel to reach lake Traful. Crossing the formidable forest, the route borders the lake, rising up to the viewpoint of Traful, that from about 70 feet high can fully enjoy the majestic beauty of the blue lake of the same name. 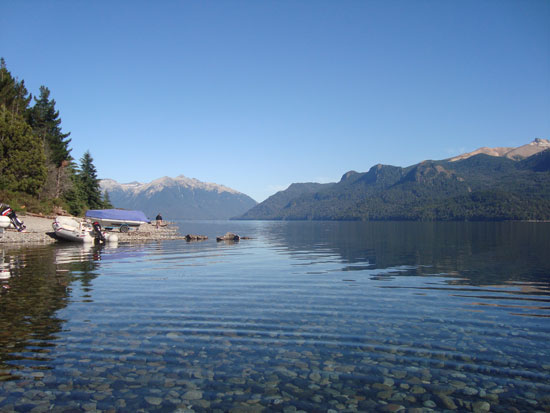 View of lake Traful from its shore. Photo courtesy of Pertino Perez family.


Later, the charming Villa Traful offers all possibilities for the best vacations. So far you have traveled 35 km and continuing the way appears Arrayán Port, a sandy beach on the western edge of the lake. Then the road goes through the forest increasingly moist and dense leaving the lake to join in the spot El Portezuelo, at 27 km from Villa Traful. There, by the National Route 234, also denominated "seven lakes route", you cross Quintupuray spot and already coasting Lake Correntoso, at 9 km you arrive at Ruca Malén.

Inmediately after it appears the Lake Espejo and Lake Correntoso again, until the junction with Route 231 heading for Chile. But to finish with this circuit you have to take left onto Villa La Angostura, at 11 km of distance.

Going through the Route 231 you can know Puerto Manzano, where there is a beautiful beach on Lake Nahuel Huapi that flows into Bonito river. Following you can find several campings, which are great places to camp along the lake. Missing about 17 km to reach the junction wth National Route 237, and from there are only resting 19 km to be back in Bariloche.

Fourtrax in Bariloche Rides a Fourtrax at cerro Catedral either in summer or winter.
Cerro Catedral: the most important ski resort 19 km from the city of Bariloche is Cerro Catedral, a ski resort of international class.
Catedral Alta Patagonia, cerro Catedral Catedral Alta Patagonia is the company responsible for Cerro Catedral. 40 lifts, snowboard park and chairlifts are some of the attractions.
Catedral Winter Ski Season Cerro Catedral winter 2011 season rates for ski passes and lifts.
Tours to Tronador Hill and Los Alerces Waterfalls This tour in Bariloche runs one of the most beautiful areas of Nahuel Huapi National Park in Patagonia, and the highest mountain in the area: El Tronador.
Circuito Chico The Cicuito Chico is a tour around Bariloche, to see the most important attractions in the area, including the Llao Llao Peninsula and Lake Moreno.
El Bolsón from Bariloche From Bariloche you can visit numerous places, including El Bolsón, a beautiful mountain village located at the foot of the Piltriquitrón hill.
Colonia Suiza in Bariloche 3The Colonia Suiza in Bariloche is ideal for touring in a day. Famous are its gastronomy and homemade sweets.
Myrtle Forest and Victoria Island 1A traditional catamaran trip in Bariloche is the visit to Myrtle Forest and Victoria Island.
Blest Port and Lake Frías From Bariloche a tour to Los Cántaros Falls and Lake Frías.
See all Articles