The tour begins at Pañuelo Port. You surf through the Blest arm, the most important of the seven arms of Lake Nahuel Huapi. The entrance of this arm is framed by two hills: Capilla and Millaqueo, and you can also sighted the Centinela island, a place where rest the remains of Perito Moreno, creator of the Argentinean national parks.

This arm, located on the border of the departments Los Lagos (province of Neuquén) and Bariloche (province of Río Negro), was known by early 1884 as "Larga Ensenada" during the explorations of O 'Connor.

During navigation you will be able to see major topographical accidents: 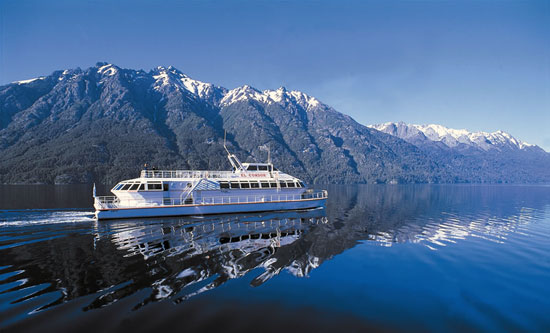 
After an hour of boating, the excursion arrives at Cántaros Port, located in Blest Bay and named by the expeditionaries Gómez and Geisse in 1855 having found there the remains of aboriginal pottery. In a Valdiviana jungle environment a promotion is done by a stepped path to the lake Los Cántaros, whose namesake drainage feeds the waterfall of 852 meters, a small mirror of water that freezes in certain periods of the winter season. You can contemplate the beauty of the falls that slide over beds of rock in some viewpoints on the trail.

The Los Cántaros cascade is surrounded by three balconies, which you can reach by a path. On this tour you can see all the Valdiviana jungle native species' splendor and beauty: coihues, colihue rods, cypress, taiques, vines and creepers. Few meters from the shore there is a large specimen of larch (Fitzjoya cupressoides), with more than 150 years.

Later, returning to the boat and crossing to the opposite shore, you land in Blest Port, where you can have lunch. This port was named after John Blest, the first governor of the province of Llanquihue (Chile), from 1853 to 1856. This site is a strategic and unavoidable point for the conduct of international crossing of lakes by passing Vicente Rosales, 978 m.s.n.m.

Within the excursion is the option to visit Lake Frías. The tour continues by bus to Alegre port, at just 3 km navigating this beautiful lake. Slicing through the green and crystal clear waters in the middle of a wooded landscape, where stands the white summit of the Tronador, you get to Frías port, near the border with Chile. There you land a few minutes to see the place and then performs the reverse route to return to Bariloche.