As if it were a huge palimpsest, Neuquén Province geography rests on hidden messages to contemporary civilization or behind her back. Unaware of his own past, it contains without knowing a pre-Columbian artistic heritage of a great cultural value.

Looking at the map of the province with the sites surveyed by Jorge Fernández ("Corpus of prehistoric art of Neuquén", Journal of the Provincial Museum, Neuquén, 1974), they warned marks and more marks indicating a remarkable total of 77 sites with Rock Art works in Neuquén. The marks form a pattern of dots that are concentrated in the north and west with higher density and, despite being significantly populated, are also found south of the Andes more than a dozen locations of paintings.

But they are more than points on a map. 9000 years ago, unknown artists carved stone and painted the scenes in the privacy of magnificent mountain range, tucked into the beliefs of their gods and myths, with the knowledge learned from their elders.

Those ancient ancestors have bequeathed to posterity a work of art that in Neuquén represents hundreds of blocks fully engraved or painted on fields whose findings are just beginning to produce.

Some of the early work of systematic assessment were performed by the student from Neuquén Gregorio Alvarez, who warned that these indigenous works contain a figurative and a spiritual aspect and express, respectively, "the intimate sense, religious, mythological and social" and on the other hand there are the extension of a language through storytelling, legends, songs and poetry.

"Some of the motifs, mainly rectilinear, can be reproduce on indigenous weaving that Indian pehuenches weace until now," Alvarez wrote, attributing the amazing work on the stones to female hands. 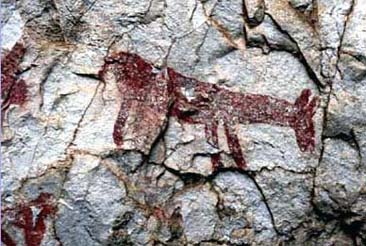 Painting made from natural substances.

Engraved by percussion (petroglyphs) or painted with pigments made from natural substances (pictographs) are mostly pieces of abstract art that organize the space and forms so you can run a complexity of thought and an advanced stage of culture.

The authors of these works were aware of symmetry, proportion and projection mirror guards that are repeated in both painted and engraved. Some figurative motifs can be identified with signs of animals such as guanacos, ostriches or feline.

Most of the works they created remain today, after thousands of years, exposed to the nature as in Colomichicó site, northwest of the province, and the quality of the elements used and techniques enabled them to survive over time and the effects of humidity, wind and sun.

Interest in the pre-columbian artistic production of this part of America is recent. From the early twentieth century began the first aesthetic analysis of Argentine works mainly in the northwest, Córdoba and Cuyo. Since the '50s, students were concentrated in areas of Río Negro and Neuquén in 1968 and newly defined the suitable methodological basis to examine these art forms in a systematic way.

It was in 1950 when Juan Schobinger, an archaeologist at the National University of Cuyo, considered the heritage of Neuquén and strokes associated with a rudimentary symbolism are also seen in other works in the Patagonian rock reserves.

An academic team from the Universidad Nacional del Comahue, under the Natural Resources Department of the Faculty of Tourism, researched, recorded and aesthetic value in works surveyed sites Colomichicó, Chacay and Chaquiras and made a proposal to use tourism to archaeological reserve the Haichol farm, located 35 kilometers from Las Lajas.

The initiative is very comprehensive and involves all sorts of recommendations and measures to enhance the place where human evidence occurred approximately 7700 years BC, so it can receive visitors in good conditions.

Teachers and researchers, authors of the project, reported that in the site was collected nearly a thousand pieces of obsidian, mostly, and explained the value of these extraordinary archaeological reserves:

"This art confronts us with a part of spiritual and aesthetic sense of our ancestors, and is therefore a feature of our regional identity."

Pehuenia: the land of the Araucaria Villa Pehuenia, Aluminé and Zapala are the major cities that make up the Pehuenia Region. There you can enjoy valleys, forests and lakes. Fishing and rafting are Among the highlights activities you can do.
Kayaking in Aluminé: feel the adrenaline Aluminé is an ideal place for kayaking and rafting in the Ruca Choroi river, privileged by its rapids and difficulties in navigation.
Sports and recreation in Aluminé In Aluminé you can enjoy different sports and recreational activities such as rafting, kayaking, fishing, horseback riding and trekking.
Tourists circuits from Aluminé You can travel three tourist circuits to explore the region. In most cases, you must have a vehicle to travel the large distances.
Provincial Pehuén Festival Aluminé gets prepared every year for the Provincial Pehuén Festival filled with an extensive program of activities and entertainment for the whole family.
Fishing in Aluminé The Aluminé river and the lakes Ruca Choroi and Quillén are ideal for fishing in Patagonia.
River Festival in Aluminé In January Aluminé celebrated the River Festival in honor of the watercourse which gives its name to the town.
Bird watching in Aluminé Bird watching is one of the new activities that can be enjoyed in Aluminé. Spring is the best season for bird watching in this section of Patagonia.
See all Articles