The same is represented by the beautiful figure of a man at the foot of the production well starting the dynamic energy that feeds the country. 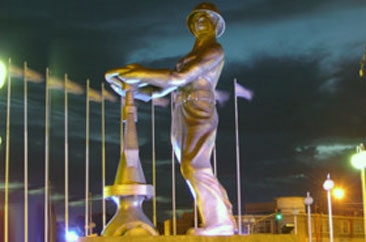 You can observe the imposing figure in the entrance of the city.

The monument, about 13 meters high, was inaugurated on December 13, 1969, when the tallest building in the village no more than 4 meters tall, and has since witnessed the growth of the community.

At its base are plaques allusive homage to the pioneers of oil in Patagonia, Fuchs and Beghin, those killed in the line of duty, the institutions that made possible the work, the foreign communities and the provincial associations and neighborhood centers.

The monument represents the oil industry in the area and the country, since opening the valve is placed in the controlled production activity, leaving implicit the work and responsibility assumed by the man in the mouth hole. As well as paying tribute to all men competing the far corners of the country arrived in search of new horizons. 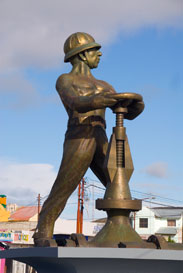 The sculptor and designer Pablo Sánchez named the monument as "Gorosito". Photo courtesy of A. Patrian

Besides the naked chest of the figure, which represents the man in supreme effort, and look north, show the attitude of workers expressing what Patagonia delivered to the country, the richness of its soil.

El Gorosito have a very special story and fun as the story says that the official opening day the communal authorities opened only monument pants and 2 days later, when 600 people held their breath, a worker with a crane was able to put the naked chest of the monument in the circle formed by the pants and boots clinging to the earth.

As for the name of the monument there are several versions. One of them concerns a radio comedian known from Buenos Aires that during the construction of the monument, said the work would be very impressive and never seen in the area, to which they replied: "Are you not exaggerating, Gorosito?".

Another explanation comes from some of the workers who built the monument in relation to an advertisement of the time related to a brand of shoes called Gorosito.

Finally, the designer Pablo Sánchez decided to take the name of the advertising to the form of refering for all residents of the monument as "the man".

Places to go: coastal road The city of Caleta Olivia offers tourists a lot of activities and places to know in its territory and its surroundings, where you can learn about the history, geography and fauna of the locality.
Caleta Olivia, historic circuit Caleta Olivia proposes to go through a circuit along the old historic neighborhoods and homes of the early settlers to learn more about its history.
Festivals in Caleta Olivia Various cultural and sports activities are conducted in the city of Caleta Olivia throughout the year. Here are the main events taking place in the town.
Patagonian Worker Festival In Caleta Olivia it is done a special celebration to honor all workers. It is the Worker Festival that brings together artists and artisans throughout the region.
Provincial Reserve Caleta Olivia An important colony of sea lions is in the Gulf San Jorge, just 10 km from Caleta Olivia. Because of the danger of extinction of this species, it was declared a Nature Reserve to the place where they live, as a way to preserve the species and ensure a not invasive tourism.
See all Articles