Caleta Olivia proposes to go through a circuit along the old historic neighborhoods and homes of the early settlers to learn more about its history.

The tour begins in the center of the city, the geographical accident "the cove" significant because it refers to the arrival of the National Guard ship and the construction of the telegraph line.

Then in the dock of the bay, you can see the first house built in 1903. The first store in the city working in what is now called the "Old House" belonging to one of the first settlers of Caleta Olivia. Beside the "Maimo" house seeking to declare the city's historical heritage to be the most original shows of the era.

The expansion of the city thanks to the discovery of oil. For this reason, the tour continues through the first neighborhoods that were installed for the workers of the oil company YPF.

The park neighborhood, located in the west of the city was the first who opened the company. Their houses were built with wood. And in the '50s begins to build the neighborhood, "June 26" with houses built of concrete.

The tour continues by former baskets of YPF, two buildings that housed unmarried workers of the company and ends at Puerto Caleta Olivia opened in 1998 currently suitable for the operation of fishing vessels, freezers, coastal fishermen and merchants. 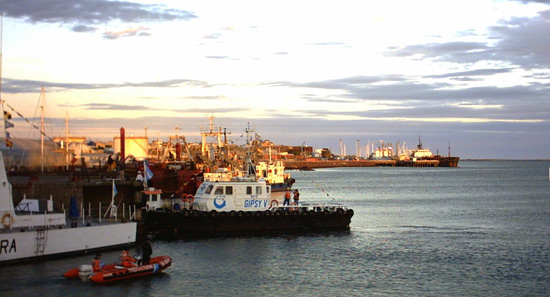 The Caleta Olivia Port is suitable for the operation of fishing vessels.
Share

El Gorosito: oil national symbol The city of Caleta Olivia has a monument to the oil workers "El Gorosito", which actually stands for the oil monument in our country.
Places to go: coastal road The city of Caleta Olivia offers tourists a lot of activities and places to know in its territory and its surroundings, where you can learn about the history, geography and fauna of the locality.
Festivals in Caleta Olivia Various cultural and sports activities are conducted in the city of Caleta Olivia throughout the year. Here are the main events taking place in the town.
Patagonian Worker Festival In Caleta Olivia it is done a special celebration to honor all workers. It is the Worker Festival that brings together artists and artisans throughout the region.
Provincial Reserve Caleta Olivia An important colony of sea lions is in the Gulf San Jorge, just 10 km from Caleta Olivia. Because of the danger of extinction of this species, it was declared a Nature Reserve to the place where they live, as a way to preserve the species and ensure a not invasive tourism.
See all Articles