Camarones is on the Atlantic coast, halfway between Rawson and Comodoro Rivadavia. Here you can find hotels and typical restaurants with seafood specialties.

30 km from the city is the fauna reserve Cape Dos Bahías, characterized by a beautiful landscape of rocks of different shades that contrast dramatically with the deep blue sea. There is concentrated a large colony of Magellanic penguins and a large number of foxes and guanacos at an optimal distance to be observed and photographed. 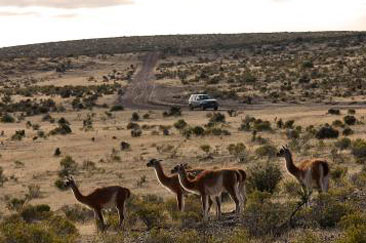 In the scene between Valdés Peninsula, Camarones, the Atlantic coast and the Florentino Ameghino dam, there's no doubt about who are the stars: the sympathetic and tender Magellanic penguin, the magnificent Southern Right Whale and the strong sea elephant with nearly 4 tons of weight.

In this area you can also see land mammals such as guanacos, Patagonian mara, gray fox, skunk and Patagonian piche.

Seabirds are characteristic of the region, besides the Magellanic penguin, black-necked cormorants, kelp gulls, the white heron, oystercatcher common, sandpipers, plovers and lapwings, while land birds are the ñandú pestiso or choique, carancho, the common goose and martineta copetona.

There are many steppes but none like the ones in Patagonia. On the vast plateau live infinity of different species of shrubs, low, spiny, small leaves, brush very young and strong and deep roots. These characteristics are determined by climatic factors in the area, and that plants need protection from the wind and endure water shortages. Therefore, in the rainy season is open showing her tiny but very showy flowers and store water for the dry months.

Bahía Bustamante, another option in the coast of Chubut Bahía Bustamante is a seaweed town of only 40 inhabitants located in the Chubut province near the town of Camarones. There are different activities that can be performed depending on the season, weather and tides.
National Salmon Festival Each February it is held in Camarones the National Salmon Festival, a festival that every year attracts fishermen from all over the country and Chile to participate in the fishing contest that is the main attraction of the celebration.
Touring Camarones In Camarones you can find historic monuments, museums and natural sites put up for recreation and enjoyment. A city that combines history with nature, ideal to enjoy a pleasant holidays.
Economic activity in Camarones The economic activities that take place in Camarones are livestock, alghae production and fisheries. Besides, lately it's been making the exploitation of Patagonian tuffs and rhyolites for architectural aims and an employability new pole.
See all Articles