Camarones is located southeast of the province of Chubut on the side of the Camarones bay in the Atlantic Ocean. The economic activities that take place in the region are livestock, alghae production and fisheries. 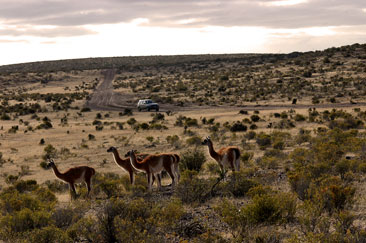 As for the livestock there are many producers dedicated to raising sheep for wool and meat sales, and it is noteworthy that Camarones has a wool classification called "woll type Camarones". There are also projections to work guanaco wool. But this is not the economic activity that generates more jobs locally.

Another activity that takes place in Camarones consuming stable workforce is the alghae production. Is mainly carried out both in the city and in Bahía Bustamante, where local collectors make seasonal work through the system of "Arribazón".

But without a doubt, the main activity is the convener and productive fisheries. Counting on a port reopened in June 2007, Camarones is dedicated to "Estiva" of the catch. Also, we have to mention the project "Mussels" being conducted by the School No. 721. This is the seed, farming and cultivation of mussels and then making sales to the general public, who are the "Hatchery", which also makes laboratory studies and cultures are incorporated mussels and crabs for educational purposes.

Finally, in Camarones is exploiting Patagonian "tobas", which aims to continue the architectural style of the 40's to 60's coated with Toba Stones. Therefore, it has allowed the exploitation of this material as well as Rhyolite by a local company that uses the material obtained for coatings, flooring and other applications.

Penguins in Cape Dos Bahías Cape Dos Bahías Reserve is on the Atlantic coast, 272 km from Puerto Madryn and 30 from Camarones. In the place there is a large colony of Magellanic penguins and guanacos, among other species.
Bahía Bustamante, another option in the coast of Chubut Bahía Bustamante is a seaweed town of only 40 inhabitants located in the Chubut province near the town of Camarones. There are different activities that can be performed depending on the season, weather and tides.
National Salmon Festival Each February it is held in Camarones the National Salmon Festival, a festival that every year attracts fishermen from all over the country and Chile to participate in the fishing contest that is the main attraction of the celebration.
Touring Camarones In Camarones you can find historic monuments, museums and natural sites put up for recreation and enjoyment. A city that combines history with nature, ideal to enjoy a pleasant holidays.
See all Articles