On February 4, 5 and 6 2011 was held in Camarones the National Salmon Festival, a festival that every year attracts fishermen from all over the country and Chile to participate in the fishing contest that is the main attraction of the celebration. 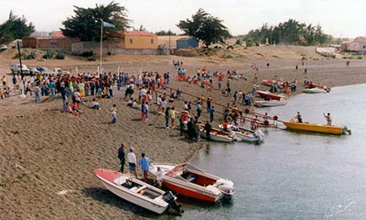 Each year Camarones is prepared to recieve fishermen from all over the country and Chile to participate in the National Salmon Festival.

The National Salmon Festival is a sporting event that was becoming a tourist attraction over the years. In 1981 was the first edition in Caleta Sara, 28 kilometers from Camarones. It was devised by a group of friends with the intention of highlighting the activities carried out in a fishing village.

Every first weekend of February residents of Camarones are preparing for more than 50 vessels involved in fishing days that grow to a length of 6 hours daily in search of the largest piece to take first place in the competition and win a trophy and cash prize as well.

The festival also features art shows, the choice of the National Salmon Queen and "Miss Salmoncito", entertainment in the Plazoleta Nuevo León and closing with a traditional meal called "Chupín del pescador" in which they cook around 1000 kilos of salmon .

Penguins in Cape Dos Bahías Cape Dos Bahías Reserve is on the Atlantic coast, 272 km from Puerto Madryn and 30 from Camarones. In the place there is a large colony of Magellanic penguins and guanacos, among other species.
Bahía Bustamante, another option in the coast of Chubut Bahía Bustamante is a seaweed town of only 40 inhabitants located in the Chubut province near the town of Camarones. There are different activities that can be performed depending on the season, weather and tides.
Touring Camarones In Camarones you can find historic monuments, museums and natural sites put up for recreation and enjoyment. A city that combines history with nature, ideal to enjoy a pleasant holidays.
Economic activity in Camarones The economic activities that take place in Camarones are livestock, alghae production and fisheries. Besides, lately it's been making the exploitation of Patagonian tuffs and rhyolites for architectural aims and an employability new pole.
See all Articles