The coastal city of Camarones presents different attractions to visit during your stay in it. From historic destinations, cultural as well as the architecture of the town. 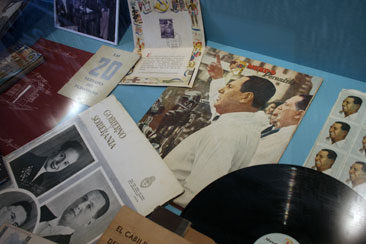 You can find posters, photos and more in the Museum. Photo courtesy of Agencia Turismo Comodoro.

The first destination is the Provincial Museum "Perón Family", opened on June 28, 2008. On this site is tried to rescue the history of social and political leader in his childhood with his family and his tenure in the Patagonia. Gen. Juan Domingo Perón lived his childhood in Camarones, with his father serving as magistrate, his mother a housewife and his brother Mario Avelino. When he became president execute works for the prosperity of the town where he grew up.

The museum is open from 8am to 8pm during the high season (December-March) and from 9am to 7pm in the fall and winter, with free admission.

A unique attraction of the town is the architecture that makes it up. Through a tour of the streets we see buildings that lead us to the late nineteenth and early twentieth century, and observe monuments honoring events of great local historical significance. Among these we can mention the accident of the ship Villarino that collided with reefs of Islas Blancas in 1899, a unique vessel that sailed many times on the Patagonian coast. One was when it was commissioned to repatriate the remains of the hero General José de San Martín from France to Buenos Aires. 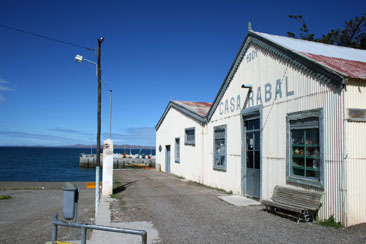 Buildings from the early 20th century in Camarones. Photo courtesy of Agencia Turismo Comodoro.
We can also mention the Plazoleta Nueva León commemorating the arrival of the Spanish to the coast of Camarones. On March 9, 1535 comes the Spanish Don Simón de Alcazaba y Sotomayor, who founded the town of Nueva León in Caleta Hornos. Thus was formed the government of Nueva León, now the province of Chubut. Every year, in the holiday of March 9, performed a ceremony to celebrate the "Day of the Spanish" in the square where is the monument.

Finally, you can visit Cabo Raso, declared a historic site that lies 85 kilometers from the town. It is equipped for use as a recreation center where you can fish, camp, hike, sunbathe. A heavenly place that combines history with outdoor recreation.

Penguins in Cape Dos Bahías Cape Dos Bahías Reserve is on the Atlantic coast, 272 km from Puerto Madryn and 30 from Camarones. In the place there is a large colony of Magellanic penguins and guanacos, among other species.
Bahía Bustamante, another option in the coast of Chubut Bahía Bustamante is a seaweed town of only 40 inhabitants located in the Chubut province near the town of Camarones. There are different activities that can be performed depending on the season, weather and tides.
National Salmon Festival Each February it is held in Camarones the National Salmon Festival, a festival that every year attracts fishermen from all over the country and Chile to participate in the fishing contest that is the main attraction of the celebration.
Economic activity in Camarones The economic activities that take place in Camarones are livestock, alghae production and fisheries. Besides, lately it's been making the exploitation of Patagonian tuffs and rhyolites for architectural aims and an employability new pole.
See all Articles