The following sites belong to Copahue Provincial Park that for its natural wealth has been declared of interest to the community.

It is explored on foot or horseback a trail that ascends to the west by a series of basalt terraces, with a few steep and the trail is very marked. You can enjoy watching various panoramic views of the valleys from Dulce creek (right), from Agrio River (left) and from Caviahue (front), besides reaching the lagoon Escondida that is located at its top.

It is done on foot, by car or on horseback and in winter cross-country skis or snow cats. Located at 3 km of distance to Caviahue west, it is accessed by a dirt road of 100 meters from the waterfall, which shows its jump of approximately 15 meters. This natural beauty is surrounded by a forest of araucarias, ñires, and beechs, dotted with mutisias.

This natural pampita covered with coirón grassland (common name of the plant) is the habitual residence of rodents and birds of prey, which feed and regulate the population of the former. Without the existence of these birds rodents will proliferate, producing in turn a series of other imbalances in nature.

From Caviahue right onto Provincial Route 26 you will pass 500 meters crossing the bridge over the Agrio river. You can climb to the third fall by car and then climb a dirt trail that runs along the other cascades (7 in total).

Basalto Fall. The slag heap of lava released by successive eruptions, has left these outcrops of basalt that can be seen, forming the river bed so as the high walls between those boxes. The hot lava as it cools take different forms and in this case, being made up of minerals called ignimbrites and basandesitas has taken the form of hexagonal prisms (also called columnar basalt), which add uniqueness and beauty to the landscape.

De la Culebra Fall. The chemical constituents of water and weather agents have altered the rock, changing its original color black or dark gray to light gray. During your tour by the circuit you will have the opportunity to observe altered basalts that have been alterned presenting yellowish, greenish or grayish.

La cabellera de la Virgen. You have been walking between copies of Araucaria (pehuen). This ancient tree, which has given rise to the name of the natives of these lands "pehuenches" or "people of Pehuen" was and is part of their food source. Its seeds, called piñones, are rich in carbohydrates and besides integrating into several meals, with it is made flour and a spirit drink that went by the pulki name.

Gigante Fall. From here, the horizon stands the figure of the volcano Copahue. In the days before the ice ages, all under intermontane draining into the Pacific Ocean, but the quaternary volcanic manifestations clogged the output and turned to the Atlantic Ocean. Large fiery lava invaded the region (now down in the form of steps and plateaus) from the old crater (near the northwest of the springs) and other minor volcanic centers.

This plant is a subshrub plant and is pressed against the ground. Its presence is indicative of the low temperatures that frequently occur. It is found throughout the Andean Patagonian parks. 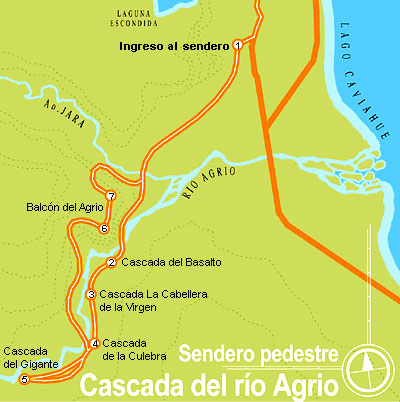 It is located northwest of the Park after traveling from Caviahue 16 km by provincial routes 26 and 27 and swerving to the left 2 km you reach the place. This has a huge leap of 70 meters about falling into a pool, whose walls show a columnar basalt form. There are three lookouts to observe the majestic landscape.

At your eyes it shall be a landscape shaped by the processes of volcanism and glaciation, more wind and river action. The glaciers gave rise to cross lakes and valleys that run from west to east, thus it was born the Lake Agrio or Caviahue of 10 km2 and a horseshoe shape.

The typical U-shaped valleys (such as Trolope valley and Caviahue valley) identify its glacial origin. The great glacier that occupied the Park had two arms extending to the east, one to Trolope Gate (north) and the other to drawer Hualcupén stream (south). The northern arm extending to a point at 28 km from Copahue, 2 km beyond the gate called Trolope (RP 27) where there are some small hills that made up the terminal moraine of the glacier. (If you can go by car, on route you can visit the Salto del Agrio and then pass the Trolope gate, enojy another leap over the Agrio after shortly walking on a trail).

It starts on horseback from Caviahue or Copahue, climbing the foothills northwest of the volcano and getting views of lake Caviahue, Valley de la Dama and the Villarrica volcano (Chile). Along the way you pass through some patches of snow, being due to walk the last 100 meters. Groups must necessarily be led by guides or mountain guides in the area.

7,000 years ago it was formed the current volcano (2925 masl) whose crater can be seen in a "V" shape that opens in the foothills south to 2650 m. A lagoon of about 3 hectares of surface acts as the crater plug receiving input from meltwater and rainfall. The fumes emitted from the chimney of the volcano, hot the water at an annual average of 200 °C, adding hydrogen sulfide and hydrochloric and transporting minerals like magnesium, sulfur, calcium, ammonium, and so on.

In the crater, it has its source the Agrio river that pass by it. To visit the crater, you can take an excursion on horseback, with an estimated total of 6 hours duration.

Snow and ski slopes in Caviahue, a ski resort for the whole family 1Caviahue has the Mountain Integrated Center where you can perform various winter activities like skiing, snowboarding, hiking dog sledding, snowmobiling and snowtrack.
CEARART: a complex for athletes of high performance and for rehabilitation The Center for High Performance in Height and Thermal Rehabilitation (CEARART) in Caviahue proposes to develop a program of medical-sports assistances, of physical and rehabilitation and physical-kinesthetic activities.
Pehuén or Araucaria's Legend The pehuén or araucaria is considered a sacred tree by the legend of Nguenchén of the indigenous Pehuenches.
Araucarias: the symbol of Neuquén The araucaria is the symbol of Neuquén. This tree can survive at low temperatures and its fruit, the piñon, is very nutritious.
Caviahue - Copahue: places to enjoy winter and summer Copahue and Caviahue offer activities to enjoy both winter and summer counting ski resorts and hot springs, in addition to beautiful sceneries.
The piñón has its own festival in Caviahue The Provintial Piñon Festival is held every year in March in the town of Caviahue. At this festival you can enjoy various activities and foods.
Torchlight Parade in Caviahue Every Friday during the winter season it is performed a Torchlight Parade in the ski resort of Caviahue.
Volcano Copahue, an unforgettable excursion From Caviahue you can hire guided hikes to the crater of the volcano Copahue.
Snow Kite in the Patagonia This winter the Caviahue Ski Resort will offer as a novelty the possibility of doing Snow Kite, a sport that was already underway in the center but only by experts. Now tourists will have the possibility to practice this extreme sport with the accompaniment of guides and instructors.
Loom Festival in Cajón Chico The town of Cajón Chico, just 10 km from Caviahue, helds in March, the Loom Festival, where there are rodeo skills, exhibitions of works of regional artisans and it is done a great camper dance, among other activities.
See all Articles