Just 10 km from the town of Caviahue it is Cajón Chico, where each year in March it is held the Loom Festival, one of the activities of the indigenous peoples of Patagonia. 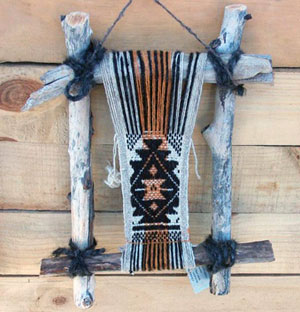 Mapuche Loom over. Photo courtesy of the Undersecretary of Tourism of Neuquén.

The fourth edition of the event was held on March 5 and 6, 2011 with an extensive program of activities. There were art shows, dance camper, stands of typical foods and crafts and activities it could not miss the rodeo skills.

The festival is organized by a committee in charge of Juan Millaín, a member of the Mapuche community Millaín-Currical, and it is done on the campus of the Traditionalist and Sports Center "Carlos Millaín".

Starting on Saturday at 10 am, the visitors enjoyed a gaucho parade with the participation of invited groups, artisans on horses and carrozasque that exhibit the handicrafts made in the region. Top mounted received a cash prize.

Activities continued with sheep riding for the kids and the race of the ring, around the stick and the roll of lead in adults, among other activities. In the afternoon it was made the Challenge on gurupa surera category that distributed $ 2,000 for first place and $ 1,000 for second.

On Saturday night, the participants of the festival and visitors were received with musical shows by the hand of Nortpatagonia, Ricardo Pino and Marcelo Cip for then lead to the camper dance by groups Nehuenche, Nortpatagonia, Los Troperitos and Los Chamas de Crystal.

On the second day of the festival was the competition of rodeo skill "los barateados", then the Career of the Bride and finally the Great Wheel in Bastos and Encimera, for which there were 65 confirmed matings.

The entrance to the property was worth $15 Saturday and $20 Sunday. As for entering the tent of the art shows were $15 and with the admission ticket is drawn a loom-woven poncho.  (argentine currency)

Snow and ski slopes in Caviahue, a ski resort for the whole family 1Caviahue has the Mountain Integrated Center where you can perform various winter activities like skiing, snowboarding, hiking dog sledding, snowmobiling and snowtrack.
Footpath to the Agrio river falls There are many places that you can enjoy in Copahue Provincial Park. Among them are the Agrio river falls, the Balcón of the Agrio and the lake and crater of volcano Copahue. These trips can be done on foot, by car or on horseback.
CEARART: a complex for athletes of high performance and for rehabilitation The Center for High Performance in Height and Thermal Rehabilitation (CEARART) in Caviahue proposes to develop a program of medical-sports assistances, of physical and rehabilitation and physical-kinesthetic activities.
Pehuén or Araucaria's Legend The pehuén or araucaria is considered a sacred tree by the legend of Nguenchén of the indigenous Pehuenches.
Araucarias: the symbol of Neuquén The araucaria is the symbol of Neuquén. This tree can survive at low temperatures and its fruit, the piñon, is very nutritious.
Caviahue - Copahue: places to enjoy winter and summer Copahue and Caviahue offer activities to enjoy both winter and summer counting ski resorts and hot springs, in addition to beautiful sceneries.
The piñón has its own festival in Caviahue The Provintial Piñon Festival is held every year in March in the town of Caviahue. At this festival you can enjoy various activities and foods.
Torchlight Parade in Caviahue Every Friday during the winter season it is performed a Torchlight Parade in the ski resort of Caviahue.
Volcano Copahue, an unforgettable excursion From Caviahue you can hire guided hikes to the crater of the volcano Copahue.
Snow Kite in the Patagonia This winter the Caviahue Ski Resort will offer as a novelty the possibility of doing Snow Kite, a sport that was already underway in the center but only by experts. Now tourists will have the possibility to practice this extreme sport with the accompaniment of guides and instructors.
See all Articles