This winter the Caviahue Ski Resort will offer as a novelty the possibility of new Snow Kite, a sport that was already underway in the center but only by experts. Now tourists will have the possibility of practice this extreme sport with the accompaniment of guides and instructors. 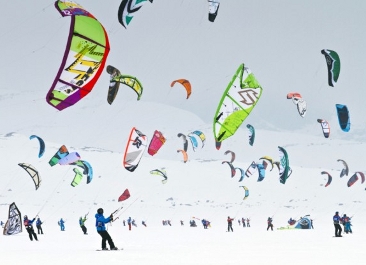 The Snow Kite combines wind's power and the feeling of sliding down the snow driven by a paraglider.

The Snow Kite is very similar to Kite Surf Kite but it uses a snowboard table and it is practiced on snow. The sport combines wind's power and the feeling of sliding down the snow driven by a paraglider. There are two types of sails that can be used. There are the kites like "foil" that are more convenient to transport and assemble in the mountains, or you can also use the same that is used in the water for kite surfing which has an inflatable structure.

The snowkiting emerged in the 80's mainly in frozen lakes in countries such as Canada, Austria, Norway, USA, among others. At first what it was done was to glide smoothly through the wind, at present it became an extreme sport that is practiced in the major ski resorts in the world.

In September it is held in Caviahue the Snow Kite Jam, organized by the Argentine Association of Snow Kite. The meeting lasts four days and involves "kiters" across the country, there are also held classes and clinics.

This sport can be practiced by anyone who wants to enjoy the snow, only you need to have basic knowledge of management of mountain and snowboard.

The winter season begins June 20 and runs through early October, until snow allows it.

Snow and ski slopes in Caviahue, a ski resort for the whole family 1Caviahue has the Mountain Integrated Center where you can perform various winter activities like skiing, snowboarding, hiking dog sledding, snowmobiling and snowtrack.
Footpath to the Agrio river falls There are many places that you can enjoy in Copahue Provincial Park. Among them are the Agrio river falls, the Balcón of the Agrio and the lake and crater of volcano Copahue. These trips can be done on foot, by car or on horseback.
CEARART: a complex for athletes of high performance and for rehabilitation The Center for High Performance in Height and Thermal Rehabilitation (CEARART) in Caviahue proposes to develop a program of medical-sports assistances, of physical and rehabilitation and physical-kinesthetic activities.
Pehuén or Araucaria's Legend The pehuén or araucaria is considered a sacred tree by the legend of Nguenchén of the indigenous Pehuenches.
Araucarias: the symbol of Neuquén The araucaria is the symbol of Neuquén. This tree can survive at low temperatures and its fruit, the piñon, is very nutritious.
Caviahue - Copahue: places to enjoy winter and summer Copahue and Caviahue offer activities to enjoy both winter and summer counting ski resorts and hot springs, in addition to beautiful sceneries.
The piñón has its own festival in Caviahue The Provintial Piñon Festival is held every year in March in the town of Caviahue. At this festival you can enjoy various activities and foods.
Torchlight Parade in Caviahue Every Friday during the winter season it is performed a Torchlight Parade in the ski resort of Caviahue.
Volcano Copahue, an unforgettable excursion From Caviahue you can hire guided hikes to the crater of the volcano Copahue.
Loom Festival in Cajón Chico The town of Cajón Chico, just 10 km from Caviahue, helds in March, the Loom Festival, where there are rodeo skills, exhibitions of works of regional artisans and it is done a great camper dance, among other activities.
See all Articles