Choele Choel: the center of the Middle Valley See map

Choele Choel is the most important urban center of what is called Middle Valley, an area about 100 kilometers irrigated by the middle stretch of Negro River. Choele functions as the core service provider to the towns of this valley area ranging from Pomona to Chimpay.

This town of just over 10,000 inhabitants, like the rest of the Middle Valley is based primarily on farming, which began with the cultivation of wheat, alfalfa and livestock, to derive then fruit, vines and vegetables .

The community has electricity services, water, natural gas, paving, a solid health infrastructure and education. There is also a municipal campsite and a beach resort located on the small island 92, which has toilets, water and electricity. 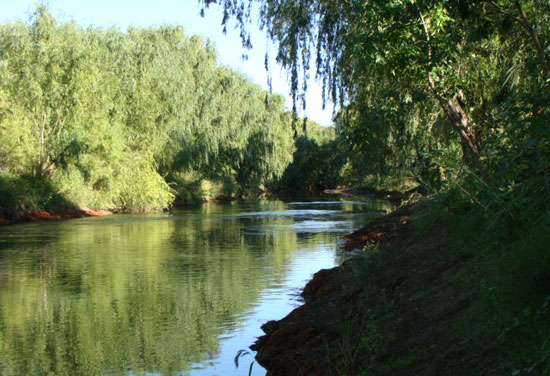 The city is also the provincial capital of folklore as it hosts the annual festival that takes place in Río Negro, and also celebrates the Provincial Calf Festival, because of the incidence of livestock production.

It is located at the intersection of National Routes No. 22 and 250, near Río Colorado. The distance between Choele Choel and the Federal Capital is 975 kilometers.

Choele Choel was founded on July 9, 1879 by General Conrado Villegas on the Pacheco island, with the name of Nicolás Avellaneda. The settlement was destroyed shortly after by a flood. The soldiers and their families, along with some civilians, settled in the place called Pampa de los Molinos, where remained until March 18, 1882, when it was transferred to its present location.

The area is populated with all races and ethnicities from around the world. There are refugees from Laos who arrived in the 70's and Orthodox Old Believers arrived from Russia.

The origin of the name

With regard to the meaning of the name Choele Choel, General Olascoaga credited "scarecrows of tree shells", noting that the Indians attached it to the bark that the river floods left tangled in the trees when it produced the downspouts.

Rodolfo Casamiquela, meanwhile, says the problem is to determine if it's a mapuche word or tehuelche. If it's Mapuche could amount to "race with yellow flower" whereas if it were a tehuelche word it means "Quijarro" or "fine river gravel".

The area of ​​Choele Choel and Middle Valley has many picturesque and pleasant places to visit. In recent years, an activity that has become very prominent in this region is farm-tourism, by which the surrounding rural establishments have opened their doors and offer visitors the opportunity to spend a day or to stay to learn in depth country life.

Fishing in the islets of the Negro River is another attractive activity, as well as hunting wild boar on the island Los Alazanes.

You can not fail to mention a visit to the birthplace of Ceferino Namuncurá, the saint of Patagonia. The Mapuche Indian who is idolized throughout the region and was born in Chimpay has his sanctuary, where thousands of pilgrims come every year.

Pomona is a town near Choele that worth visiting. The streets will remind you to an evergreen garden. Belisle, Darwin, Lamarque, Beltrán and other towns in the Middle Valley are other towns by which you can tour around if you are in the area.

Los Alazanes island and the possibility of hunting wild boars On Los Alazanes island, near Choele Choel, you can go fishing for mackerel and perch but the highlight is the hunting of wild boars.
Middle Valley: endpoint to an exodus of 400 years From German and Orthodox to refugees from Laos and Creoles. Middle Valley area constitutes a real mixture of races.
Laos Refugees in the Middle Valley The Hmoobs in Middle Valley. Their arrival and establishment, despite having to endure being included within the group of "Laotionas" even if they were not.
Provincial Calf Festival Choele Choel has one of the most important festivals in Patagonia. There takes place the Provincial Calf Festival as a recognition of the livestock vaccine that predominates in the region.
See all Articles