"Memorias de Humo": a simple project, a transcendent work, a story of belonging and displacement Mapuche.

This is the story of Lago Rosario, a small rural settlement located within the city of Trevelin, at the foot of the Patagonian Andes in the province of Chubut. A story that begins with the banishment. 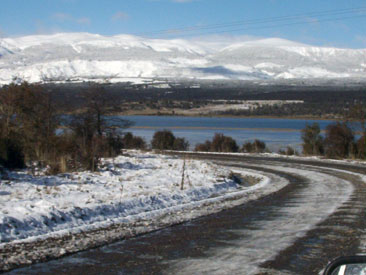 By the late nineteenth century, hundreds of families araucano crossed the Andes, down south in search of land to occupy a strip of land whose ownership was disputed between Argentina and Chile.

As it was happening in Argentina's Patagonia, where the army directed by Julio A. Roca was displacing the aboriginal settlements from their homes on behalf of the Conquest of the Desert, also the government of Santiago de Chile pursued and confronted with the Mapuche settlements whose members were forced, also by force, to withdraw into the mountains and even crossing over South (provinces of Neuquen and Río Negro) to continue the search for a new destination.

The beginning of the twentieth century finds several of those Aboriginal families, already scattered in their membership in groups or tribes, occupying lands in the vicinity of the "Colonia 16 de Octubre", which is located in one of these fertile and beautiful valleys of Patagonian Andes, at the then National Territory of Chubut.

On April 30, 1902 the inhabitants of this colony (mostly of Welsh descent) participated in a referendum by which the governments of Argentina and Chile (represented by the Perito Francisco Moreno and Dr. Balmaceda respectively) resolved the border dispute that remained in that region, which was refereed by the British Crown with the representation of Sir Thomas Holdich.

The resolution of the border dispute caused many Chilean families who lived in the Argentine side and whose sovereignty was confirmed by the referendum, decided to return to their country by crossing the border again.

The process of crossing the border over and over went on, however, for several years and decades. Some families had even opted to stay in Argentine territory and claim the land as the inmigrants who came from Europe did then. 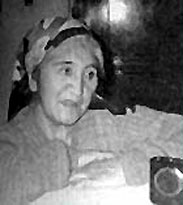 Margarita Cheuquehuala and her experiences in Lago Rosario.

Such is the case of families Millahuala and Cheuquehuala which in 1930 had long inhabited the valley located on the banks of a lake full of legends, stories and myths.

"Lago Rosario" was the name that the first territorial governor of Chubut, Luis Jorge Fontana, gave in 1885. But the place was already its history.

In the lake nest the dreaded "leather" and "Mermaid." Until there came the tehuelches to hunt wild cattle and they used to pray next to a rock on which the sun glinted of blood as an augury of good hunting. There is still heard in the nights of rain, the tehuelche hunter's lament dead gored by the last wild bull, or "Toro de Agua", as it is recalled.

Determined to settle down with their children born in that place, the Cheuquehuala and Millahuala built a school in 1934 and asked the Argentine government to appoint a teacher. From Buenos Aires it was respond to them that will have a teacher when people representing a total of 25 children.

As an irony of fate, the same government of Buenos Aires in 1937 determined the removal of Aboriginal Reserve Nahuel Pan, about thirty kilometers north of Lago Rosario, where more than 300 people, children, adults and elders, were banished after thirty years of living there, a land given in 1908 by the same government that now cast into the wilderness or the best to their own devices.

This fact led to several displaced families, particularly those with children, being accepted in Lago Rosario. It did well to gather the required number of students so that Buenos Aires sent finally a teacher. The arrival of this mark the first official state presence in Lago Rosario, and therefore the recognition of people who lived there.

La Trochita: a very unique train 1An historic express that daily makes its way over a landscape of dreams. It awakens the fascination of the fans because it preserves the original locomotives and wagons.
Los Alerces National Park Among waterfalls, streams and beautiful sceneries and the beginnings of the beautiful Valdiviana Jungle. Trekking or sailing tours, and the possibility of camping within the Los Alerces National Park
Leleque Museum: to the rescue of Patagonian history Historical Museum of Leleque is a carefully crafted space in the middle of the Patagonia steppe. It shows the history, stories and legends of a land largely uninhabited.
Futaleufú dam and river Futaleufu dam is an important structure built during the seventies, whose function is to generate power to meet Aluar's demand on the coast of Chubut.
A trip to Chile from Esquel The San Rafael Glacier, located in the homonymous lake in Chile, provides an excellent excuse for a unique tour visiting the mountain forests near Esquel, the beautiful Valdiviana forest in Chile and return through the north of Santa Cruz.
From Esquel: Lago Puelo National Park Less than 200 kilometers from Esquel, traveling a nice path between foothills hills, one reaches the Lago Puelo National Park, which offers beautiful sceneries and countless activities.
Esquel hosts cycling competetitions Esquel is one of the host cities of national cycling championships.
Fishing in Esquel: Futaleufu River basin In the Esquel region most rivers drain into the Pacific allowing fishing of species that are commonly found in Chilean rivers.
More than 100 years since the referendum A fact that few people in this country are aware of is that in 1902 Trevelín Welsh settlers chose to be Argentine and not Chilean, certainly influencing the final decision of the arbitration award on these lands.
Summer in Esquel Horseback riding, rafting, bird watching, visits to Ice Tunnels and to the Los Alerces National Park are some things you can do during the summer in Esquel.
See all Articles