A trip to Chile from Esquel See map

Esquel is a good base for exploring the San Rafael Glacier, one of the most beautiful places of Southern Patagonia, located in the North Patagonian Icefield (CHPN). The ride to the glacier and back (partly by land and partly by boat) is an absolutely beautiful hike every step of the journey. 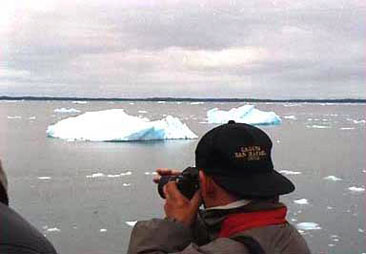 Boats to the glacier leave from Port Chacabuco.

From Esquel you can cross to Chile by the Futaleufu and Palena Pasos. Both are gravel roads and bind in the vicinity of Villa Santa Lucia. In this section the "Southern Road" is characterized by going through the lush and lovely Valdivian forest by a narrow and winding road, surrounded by thousands of giant nalcas. Tens of suspension bridges cross the rivers and streams that flow down from the mountain. In the evening you arrive at Port Aysen.

The trips to San Rafael Lagoon depart from Port Chacabuco, distant 15 kilometers from Aysen and sail through the Strait of Elefantes to San Rafael lagoon. The ship sails at night, runs along the lake the next day and returned to port to the third morning. Tours also leave from Port Montt to a total of five days. Some more adventurous travelers reach the glacier to make the climb to the hill located behind the San Valentin glacier. 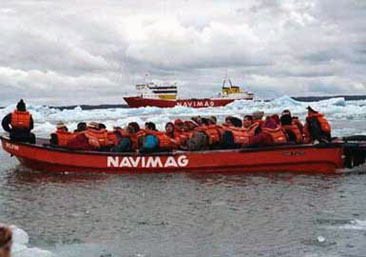 An unforgettable trip to this impressive glacier.

Tourists from Europe, America and Asia are part of these excursions that leave adults and children dazzled by the grandeur of the glacier. During the trip across the lagoon there are hundreds of icebergs, some of which weigh thousands of tons. Once near the glacier, passengers are invited to browse the vicinity of it on boat.

In the afternoon you can see tears and collapses in front of the glacier, which blocks of more than 10 feet high break and plunge into the waters of the lagoon, delighting the audience with a great spectacle.

Both ice plateaus are remnants of the glaciation occurred in the southern part of the American continent and whose final retreat began about 10,000 years ago. Considered a survivor of the Pleistocene ice age, the CHPN is a climatic phenomenon unique in the world, especially considering that is on the same latitude as Switzerland. This huge glacier mass has been preserved due to the extremely wet and cold weather.

Discovered in the thirties, this plateau hosts inside lots of ice covered hills, the highest of them, the Valentine's with 4,060 meters is the highest summit of Southern Patagonia. It was raised for the first time on December 18, 1952 by an expedition of the Club Andino Bariloche.

After visiting the glacier, you can continue south visiting other places of special beauty. From Port Aysen to Cochrane (to the south along the Lake General Carrera on Chilean territory) there are 400 kilometers. The first section is of asphalt but the last few kilometers are very winding, you have to travel at 30 kilometers per hour.

Bordering the lake itself, but now moving in the direction NE to Argentina you get to Chile Chico, at 200 kilometers. Touring them demand at least 6 hours trip. It borders lakes Carrera (Chile) and Buenos Aires (Argentina) by a very narrow path. In Argentine territory you can spend the night in Los Antiguos or Perito Moreno.

La Trochita: a very unique train 1An historic express that daily makes its way over a landscape of dreams. It awakens the fascination of the fans because it preserves the original locomotives and wagons.
Los Alerces National Park Among waterfalls, streams and beautiful sceneries and the beginnings of the beautiful Valdiviana Jungle. Trekking or sailing tours, and the possibility of camping within the Los Alerces National Park
Leleque Museum: to the rescue of Patagonian history Historical Museum of Leleque is a carefully crafted space in the middle of the Patagonia steppe. It shows the history, stories and legends of a land largely uninhabited.
Futaleufú dam and river Futaleufu dam is an important structure built during the seventies, whose function is to generate power to meet Aluar's demand on the coast of Chubut.
From Esquel: Lago Puelo National Park Less than 200 kilometers from Esquel, traveling a nice path between foothills hills, one reaches the Lago Puelo National Park, which offers beautiful sceneries and countless activities.
Esquel hosts cycling competetitions Esquel is one of the host cities of national cycling championships.
Fishing in Esquel: Futaleufu River basin In the Esquel region most rivers drain into the Pacific allowing fishing of species that are commonly found in Chilean rivers.
More than 100 years since the referendum A fact that few people in this country are aware of is that in 1902 Trevelín Welsh settlers chose to be Argentine and not Chilean, certainly influencing the final decision of the arbitration award on these lands.
Colony Lago Rosario Told by its protagonists, the moving story of the inhabitants of the Colony Lago Rosario has been published in the book "Memorias de Humo".
Summer in Esquel Horseback riding, rafting, bird watching, visits to Ice Tunnels and to the Los Alerces National Park are some things you can do during the summer in Esquel.
See all Articles