Route 41, also known as the Road of Mount Zeballos, combines steppe landscapes with rock formations that resemble a lunar landscape.

From Los Antiguos you start from the viewpoint of Jeinimeni River, 2 kilometers from downtown, from which you can see the town and Lake Buenos Aires. At 22 kilometers of the route it appears natural and scenic spot and following a few kilometers along it is the geological formation "Toscas Bayas", formed by cliffs of sedimentary rock.

Moving through the rock formation, landscape changes from steppe to a beech and ñires forest, perfect for a walk through virgin paths.

Following the tour you can visit several farms dedicated to the production of wool and then you reach some rock formations that are called "cucuruchos". Within this landscape, that resembles the moon, you can go trekking with a guide. The tour lasts approximately 1 hour traveling these cones of stone eroded by the wind.

Ahead lies the highest point of the province of Santa Cruz, El Portezuelo, at 1500 meters. This point is characterized by the complete absence of vegetation and its lava formations thus formerly it was a crater of a volcano.

The last point of this journey is the town of Lago Posadas. There are lakes Posadas and Pueyrredón with their attractive color contrasts, the former has turquoise waters while in the second the water is dark blue.

This alternative route, for those who like to enjoy travel by unexplored paths, adds 165 kilometers through lakes, rivers, hills, forests and steppes. Incredible landscapes in which you can hike, horseback riding, fishing or simply enjoying life outdoors. 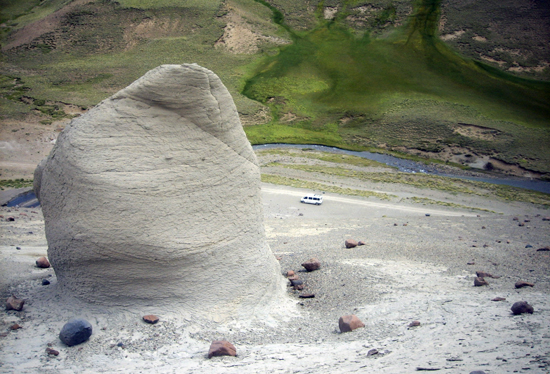 Lake Buenos Aires has its festival Since 2002 the city of Los Antiguos in Santa Cruz celebrates the "Lake Buenos Aires Festival". During the last days of October and early November this party celebrates sports practice on the lake and awareness of the environment.
Fly Cast Congress The Fly Cast Congress takes place in mid-August in Los Antiguos, Santa Cruz. The conference extends over three days where fishing, tying, exchange of information and other actvities are held, and of course anecdotes on everything.
Cherry Festival Since 1991, during the first days of January the city of Los Antiguos in Patagonia celebrates the Cherry Festival. After the harvest of cherry, the city honors this delicious red fruit.
Fall and Easter weekend in Los Antiguos In fall, Los Antiguos offers a landscapes ranging from red to orange. On a tour of the farms you can taste their products or try your hand at fishing.
A ranch day in Los Antiguos The city of Los Antiguos offers the possibility to visit the variety of farms that surround it in which you will be able to tour the plantations of fruits and vegetables, taste products, learn how they are processed on a farm.
See all Articles