Every year the Cave of the Hands Festival is celebrate in Perito Moreno. This is an event to honor the main attraction available on the town in which local and national artists meet. 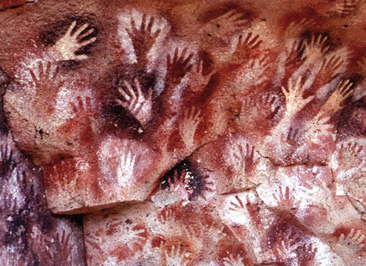 The Cave of the Hands is one of the most important rock art manifestations in Patagonia.

The festival emerged in 1979 through the initiative of some members of the ballet "Metcharnue" with the approval of the then mayor and supported by the mutual association. It was originally going to be called "Festival of Coirón" but finally opted for the name "Cave of the Hands Festival" in homage to the archaeological site that is located near the city. Throughout the years numerous artists recognized nationally have performed on the festival stage.

Cave of the hands

The Cave of the Hands is an archaeological site located in the canyon of the high valley of Pinturas river featuring one of the manifestations of most significant rock art of the Patagonia. There you can see in negative handprints, pictures of guanacos, geometric, lines, dots and figures representing the sun, 9300 years ago works made by the Tehuelche Indians and their ancestors. In 1999 was declared a World Heritage Site by UNESCO.