The National Southern Folklore Festival is held every year in Pico Truncado, Santa Cruz. This festival takes place in order to disseminate the national and popular folklore. 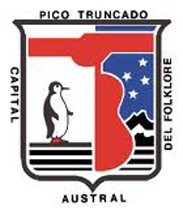 During the festival, delegations from around the country compete for the coveted "Golden Penguin", the top award given to those who secure first place in the contest. Participants are divided into categories such as solo vocal, couple of traditional dance, combined northern Malambo, reciter, engraving, gruop of traditional dance, etc, and are reviewed by members of the Secretary of Culture of the Nation.

It also has a cultural hall, a craft show and a business lounge in which those attending the festival can engage in recreational activities.

The little ones also have jurisdiction under the festivalito.

The festival began as a folk rock in 1968 in which only local people participated. Then grew, calling on participants from throughout the region until it was declared of national interest and become the National Southern Folklore Festival. This takes place every year between October and November.