Magellanic penguins (Spheniseus magellanicus) spotted by the first Europeans in Magellan's voyage in 1520 were described by the chronicler Antonio Pigafetta as "strangers geese." It is one of the few flightless birds and their wings have become flippers swim.

It lives in huge colonies such as Punta Tombo in Chubut, considered the largest mainland colony, with half a million copies. 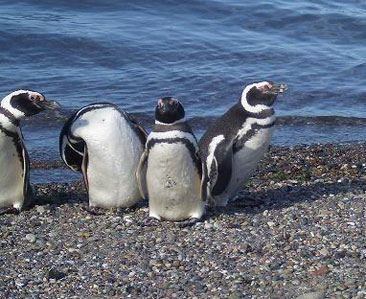 It is of medium height, between 50 and 60 centimeters, and weighing up to 5 kilograms. It is adorned with a white chest and a white stripe around the head, neck and wings.

Year after year, in August the males arrive at the "penguin". The females arrive in September and begins a period of territorial fights, some very violent, parades with arched necks, short steps, around each other, knocking Peak Dives and mating purposes. In October they dig nests with their feet, if possible under bushes. The pair incubates two eggs (twice as big as a hen) for 40 days.

In November the already born chicks force their parents to go to sea in search of food (fish and squid that they regurgitate prepackaged) and to extreme care to predators, cook and brown gulls mostly.

The penguins nest very close together, causing tension due to lack of space, but also they are better protected by all. In January the chicks are encouraged to move away from the nest.

From December to April plumage move: first the juvenile, then the chicks, preparing to enter the water, and finally the breeders. The winter find them in the warm waters of Brazil.

Cape Vírgenes Nature Reserve From Río Gallegos you can visit Cape Vírgenes in Patagonia. This is one of the main colonies of Magellanic penguins on the coast of Argentina and it also has the distinction of being the southernmost point of continental Argentina and America.
City tour of Río Gallegos Rio Gallegos offers an organized city tour to visit its many beautiful places.
The Eduardo Minnicelli Atrs Museum On November 1st 1996 in the city of Río Gallegos oppened the Arts Museum "Eduardo Minnicelli". It is the first in the province and the southernmost in its specialty.
Argoturism: Hill Station tourist farm From Río Gallegos out by the National Route 3 heading east to reach Güer Aike after 27 km. From there continue on National Route 3 north 6 kilometers where there is a junction with Provincial Highway 55, gravel road that runs along the north bank of Gallegos river. Follow it about 30 km to the Hill Station.
Grandma Paredes' House, a city attraction In Rio Gallegos you can visit the historic monument dedicated to Grandma Paredes. She had the house on the wharf that had the first telephone in the city. Today it is a historic monument that can be visited.
What to do in Río Gallegos Río Gallegos is a strategic point of Patagonia. Visitors to the city can find many attractions to enjoy.
Stone Crosses in Patagonia A stone cross is a monument that is built and rised towards a homage or devotion. Usually they are religious and are located in public places, mainly in crosses at churches and roads. In Río Gallegos one was rosed to the memory of the founders of this town.
To Punta Loyola from Río Gallegos Punta Loyola is located 37 kilometers west from Río Gallegos and is the point where the Argentine sea joins the ria of Gallegos river. It is also the final point of the traditional National Route 40 that crosses Patagonia.
See all Articles