What to do in Río Gallegos See map

Río Gallegos is located at a strategic point of Patagonia, which can be reached overland from the north on National Route 3, which in turn continues to the south articulating with the province of Tierra del Fuego, the only way of land access to that province.

Visitors to the city can find different attractions to visit: 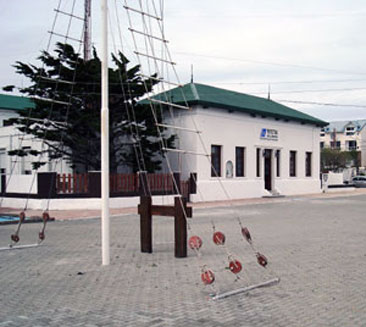 View of the Prefecture building in Río Gallegos.

It was created in 1879 under the presidency of Nicolás Avellaneda. But not until 1885 Prefecture staff, Subprefecto Bonani and Frigate Lieutenant Miguel Lazcano reached the harbor of Río Gallegos. They were concerned with finding an anchorage with greater benefits than the existing in the estuary mouth (Punta Loyola area) and determined, for strategic and security reasons that the place on the right bank of the river, 12 miles the mouth, was more appropriate.

On December 19, 1885 the work of installation of the Prefecture began, and within days it was completed and occupied by national authorities. A report of the Commander Spurr detailed the Foundation of Río Gallegos, who ordered the construction of cells at about 600 meters from the coast and 30 meters from a water well. The building of the prefecture is located on the corner of Roca Avenue and Córdoba.

It is located in Rawson and Governador Lista, where in 1952 was begun the construction of a shed which would be the fire station. Initially this unit was equipped with fire elements and materials to fight the fire, but over time vehicles and machinery began arriving, between which were highlighted Canadian Pumper Jeep Willys and Chevrolet trucks, all surplus from the second World War, as well as portable water pumps line Crosley.

Among vehicles brought as war surplus material from IIWW is still preserved a Chevrolet truck equipped as a pumper Model 45, which was dubbed as "El Santacruzeño". 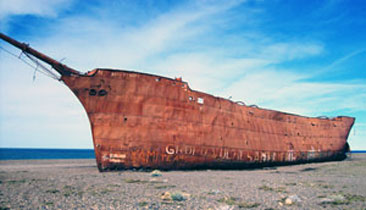 Abandoned tugboat on the banks of the River.

Located on Avenida Almirante Brown is considered a cultural history expression. The wooden barge dock belonged to the former Swift refrigerator, built in 1910. The dispatch of the meat was carried forward as follows: the raw material was loaded into steam cranes on barges that transported them to the ships caponiers. In the 70's for various reasons, mainly economic problems, the refrigerator Swift files for bankruptcy and abandoned the facilities and the wooden barge fails to pay duties.

In the 60's, the former YCF company acquires the tugboat, to guide ships entering the local river to the dock of YCF, performing maintenance of these boats. The tug boat was manned by 6 people, including the captain of the boat. It served until 1993 and then stayed in the abandonment in which it is now, as you can see it on the south bank of the estuary of the Gallegos river.

The pier is located on the coast on the south bank of the Gallegos river and it was built between 1951 and 1956. In those years it was necessary to use coastal land and those near the railway line, which moved the ore from the mines of Río Turbio, that's why the dock was built. Temporarily it was mounted a wooden pier for mooring boats and conveyor belts were placed for mechanized partially the load. 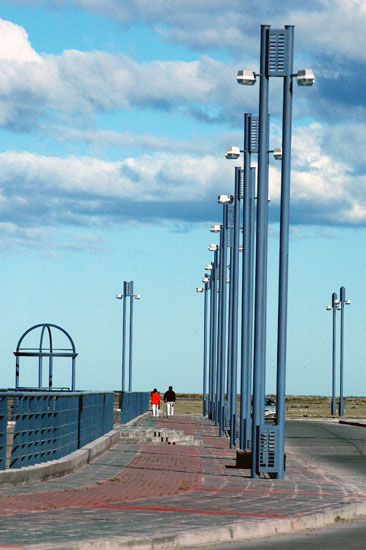 Río Gallegos's promenade: a beautiful place to stroll and enjoy the fresh air.

Then were built two vessels of dawn, a high conveyor belt into the den reinforced with its own concrete bunkers, the high hard wooden bridge, a cart tipper, two electric motors that drive the conveyor belts and a generator.

Currently it is operating the port of Punta Loyola "Arturo Illia", inaugurated in 1984, which is characterized by deep waters and a modern system of loads.

In the 60's it were built these warehouses, supplies, equippment and repair machinery, blacksmithing, woodturning, and so on. that held office until 1993.

Half pipe structures were called "Qouset", being the first to be built on the campus of YCF. In the ex-warehouse or deposit of Y.C.F. there was a board with lights that indicate between which was the convoy stations rail. Communications between the stations were made via telegraph and radio. These warehouses are on Almirante Brown Avenue.

Cape Vírgenes Nature Reserve From Río Gallegos you can visit Cape Vírgenes in Patagonia. This is one of the main colonies of Magellanic penguins on the coast of Argentina and it also has the distinction of being the southernmost point of continental Argentina and America.
City tour of Río Gallegos Rio Gallegos offers an organized city tour to visit its many beautiful places.
Magellanic Penguins Magellanic penguins (Spheniseus magellanicus) spotted by the first Europeans in Magellan's voyage in 1520 were described by the chronicler Antonio Pigafetta as "strang geese." It is one of the few flightless birds and their wings have become flippers in order to swim.
The Eduardo Minnicelli Atrs Museum On November 1st 1996 in the city of Río Gallegos oppened the Arts Museum "Eduardo Minnicelli". It is the first in the province and the southernmost in its specialty.
Argoturism: Hill Station tourist farm From Río Gallegos out by the National Route 3 heading east to reach Güer Aike after 27 km. From there continue on National Route 3 north 6 kilometers where there is a junction with Provincial Highway 55, gravel road that runs along the north bank of Gallegos river. Follow it about 30 km to the Hill Station.
Grandma Paredes' House, a city attraction In Rio Gallegos you can visit the historic monument dedicated to Grandma Paredes. She had the house on the wharf that had the first telephone in the city. Today it is a historic monument that can be visited.
Stone Crosses in Patagonia A stone cross is a monument that is built and rised towards a homage or devotion. Usually they are religious and are located in public places, mainly in crosses at churches and roads. In Río Gallegos one was rosed to the memory of the founders of this town.
To Punta Loyola from Río Gallegos Punta Loyola is located 37 kilometers west from Río Gallegos and is the point where the Argentine sea joins the ria of Gallegos river. It is also the final point of the traditional National Route 40 that crosses Patagonia.
See all Articles