Salmonid species that exist in Patagonia have been imported and planted for enabling the development of sport fishing, as the number of amateur and poaching has increased. 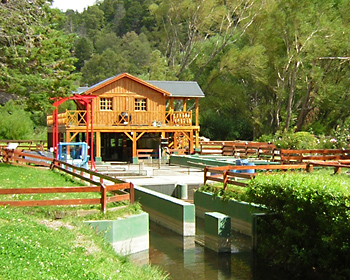 The trap and canals through wich fish enter.
With the intention of holding the appeal the municipality of San Martin de los Andes along with International Cooperation Agency (JICA) through the Centre of Applied Ecology of Neuquén (CEAN), developed the project to build the Fish Capture and Bred Station in this city.
Opened in 2000 in San Martin de los Andes, the Station is located at the mouth of the Pocahullo creek into the lake Lacar. The head of the fish trap, biologist Javier Urbanski, said "the station is a place dedicated to catching trout breeding in winter time."

From May salmonids return to Pocahullo creek to spawn. A female lays about 5000 eggs from which very few are fertilized. With the help of artificial insemination that is performed in the station, fertility reaches 70% of the eggs. The large number of well managed fish is used for planting in lakes in the area.

Four are the objectives of this project:

The fish trap consists of a series of canals and river diversions aimed at prosecuting the passage of fish into it, where there is a mill which is responsible for capturing and automatically place the fish in a special pools built for that purpose. Once the fish arrive at that place, are classified according to sex, species and stage of sexual maturation. Later a artificial spawning and at the end fish are stocked. 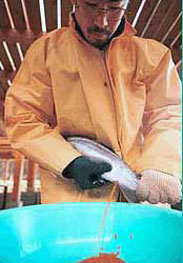 Artificial spawing, the trout lay up to 5000 eggs per year.
The day we receive more visits in the season is Friday, because that day of the week is spawning trout.

"We extract the eggs and sperm in artificial insemination and make the catch in the same season. This activity takes place at 11 am and people interested in observing the work, after you pay a minimum price - can be at that moment", biologist said.

The trap was set by the municipality of San Martin de los Andes through a loan but the management is in charge of the province of Neuquén through CEAN. Also has the full support of the Japan International Cooperation Agency project that involved sending a group of engineers who did the design of the station.
For more information those interested can contact the phone (02972) 422927 or mail peces@smandes.com.ar