Since 2008 it takes place in Trevelin the Ternero Cordillerano Festival, a festival that highlights the camper activity and traditions of the locality. The "Gaucha Group of Trevelin" is in charge of carrying it out looking gaucho customs of the town and creating an identity that is represented during the festival. 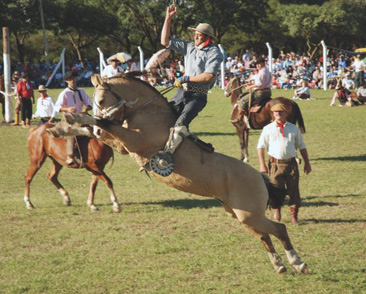 The rodeo is a tradition at this event.

What prompted the group to pursue this activity was the need for Trevelin to be represented by a party to show the identity of the people, their customs and traditions.

Thist year the festival featured animation by Beto Rodriguez and participation of the payadores Carlos Marchessini and Luis Hernandez. There were $15000 in prize in competitions like the palette of steers, ride bulls, riders capons, surly cow milking, pig soapy for women, special mounts, among others.

The celebration also featured a creole lunch and the election of the queen.

Tours from Trevelin Incredible places to know the geography and life of the mountainous region where it is the town of Trevelin.
Welsh tea: a treasure preserved in Chubut One of the enticing activities that Trevelin has to offer to its visitors: drinking tea with a delicious cake in the traditional houses dedicated to the field. But historically, it has the importance of having been used by the Welsh to create solidarity with the natives.
Culinary tradition: the black Welsh cake Despite its name, it must be said that the recipe came from the creative combination of ingredients in the few colonies in Argentina.
Tulips' Cultivation In the month of October the city of Trevelin wears colors when the tulips bloom, which has become a major tourist attraction for tourists that each year come to observe the beautiful tulips.
Expo Fair of Trevelin Trevelin Expo Fair is an event that combines the production, history and creativity in a single framework which is the city of Trevelin.
The Eisteddfod of Trevelin A Welsh tradition that came with the colonization of Chubut in 1865 remains intact in the city of Trevelin. The Eisteddfod is a literary-cultural event involving artists from the region, country and the world.
See all Articles