Viedma: the capital of Río Negro and the oldest settlement in Patagonia See map

Viedma has the distinction of being not only the capital of the province of Río Negro, but also part of what is the oldest settlement in Patagonia. Its origin dates back to April 22, 1779. It was part of the population, under the Negro River's Fort, it was called Carmen de Patagones. 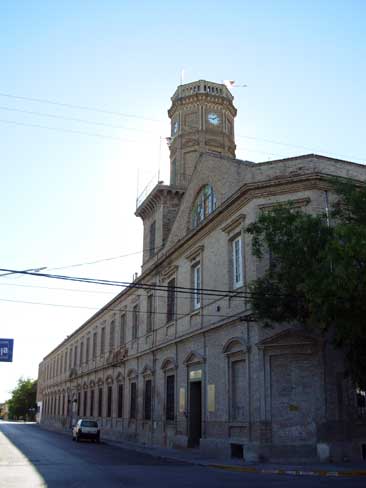 On July 1899, Viedma was ravaged by a flood of the river, leaving only the church standing. At that time, the government moved temporarily to Choele Choel to rebuilding the city. The following year, 1900, it was designated capital of the then Territory of Río Negro.

Currently there are traces of this natural disaster. The river appears only as a mute witness to the progress of the city that is the political and administrative center of Río Negro.

Today it has nearly 50 000 inhabitants. Its economy is primarily agricultural and small-town life almost. Sounding provincial, it is lying on the right bank of Negro River, opposite the historic Carmen de Patagones.

Viedma, Patagonia nearby. Gateway to reserves and protected areas where nature can be enjoyed in all its glory.

Río Negro International Regatta The Río Negro International Regatta involves a distance of 6 stages with two breaks, starting in the capital of the province of Neuquén and ending in the beach resort of Viedma, the capital city of Río Negro.
The Coast Road and La Lobería from Viedma The coast road of Viedma is a path the follows the river bank and then the Atlantic Ocean shore, connecting points of great interest.
Sea lions and unique beaches in Punta Bermeja From Viedma you can visit Punta Bermeja one of the larges sea lion colonies in the world.
San Blas Bay - Del Jabalí Island San Blas Bay, near Viedma, is a haven for fishermen, but also for those seeking peace when taking a vacation.
A visit to Viedma's farms In Viedma you can learn all about the fruit production in the area, an interesting program for those who come to this region of Patagonia.
Bruce the englishman and a life at sea The story of an Englishman who knows all the secrets of the sea and fishing. He lives in San Blas Bay, 100 km from Viedma.
Old quarter of Patagones: a pleasant stroll through the past Take a tour of the city of Carmen de Patagones and see its historic buildings, some over 200 years old.
San Blas Bay: a fisherman's paradise. San Blas Bay, 100 km from Viedma, is without a doubt one of the best places for fishing in Patagonia.
The Patagones-Viedma water race. The Patagones-Viedma is a water festival that includes several disciplines, including the second stage of the Grand Prix of International Swimming and High Diving demonstrations.
See all Articles