In the southern province of Buenos Aires, San Blas Bay is a center of great attraction for the characteristic of offshore well with a few waves and a great deal for the sport fisherman. 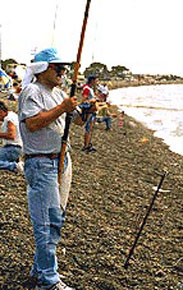 The beaches attract many fishermen from all sides.

From Viedma, traveling along the National Route 3 at the height of 918 km we find the place "La Querencia" and going 22 kilometers of consolidated road you reach the town of José B. Casas. From there you still go 35 kilometers to reach the Del Jabalí Island, which has an area of ​​6000 hectares and is entered by a bridge that crosses a stream.

San Blas is an area of ​​lush catching fish, which has been calling this place "Sport Fisherman's Paradise". The shore of the island consists of a slope of boulders on one part and on the other by a sandy beach.

In these coasts you may make many variations of style and type of fishing. Opposite the village you find the boulder shore at depths very close to the beach about 15 meters, ranging from camping La Rebeca passing in front of Prefecture to the mouth of the ria.

To the south, between La Rebeca and the old iron mine, then around the island until just before the Chapel of the Franciscan Fathers, it extends an area of ​​sandy beaches, excellent for catch dogfishs between the months of September and December, plus a variety of fishing consists of whiting, croakers, gatuzos, fish stick, rays and skates. In its gutters you can achieve most of the species in the area.

There is also an ideal formation of small breaks to catch the fatso silverside with bottom lines. In this sector, with low tides you also catch clams which are then used as bait.

An interesting alternative are the pleasure and commercial fishing boats that conduct fishing trips off the Gama island and in the brooks of the islands of the area, where tourists are able to capture many species, highlighting sharks and large sea bass, also whiting, little and big rays. The catch of the largest, number about ten species: gatuzo, pigeon, Bacot, escalandrún, hammer and paint red.

Another possibility is the place that offers the Jabalí Creek, where with tide you can get good quantities of silverside and sole at mid-water depth. Croakers, sea bass, whiting, gatuzos, Axle stands, flat fish and small silverside afloat. In the bridge area you can fish from shore or from the bridge that crosses it.

"The 24 hours of San Blas" is considered one of the biggest sporting events in the country as far as fishing is concerned, with an uninterrupted career of three decades. It is performed during the third weekend of January each year.

Finally, "the Patron Feast of San Blas" in honor of the patron saint of San Blas (Protector of the Throats), performed on 3 February each year with a procession by the sea and the village streets.

San Blas Bay offers a wide range of services to visitors, facilitating the arrival and stay in place. To get from Carmen de Patagones there are different means of transport such as buses, taxis and vans. In addition the villa has first aid room, permanent police station, two chapels, service station, auto repair shops, box and public telephones.

When choosing a place to stay you can choose between hotels, apartments, cottages, houses for rent and campings, while the food supply extends to restaurants, food stores and cafes, together with the various markets.

There are terrestrial fishing trips in 4x4 vehicles to the sandy beach with a guide and a bait service for varied fishing, and shipped tours by fishing and sport boats with fishing equipment.

Río Negro International Regatta The Río Negro International Regatta involves a distance of 6 stages with two breaks, starting in the capital of the province of Neuquén and ending in the beach resort of Viedma, the capital city of Río Negro.
The Coast Road and La Lobería from Viedma The coast road of Viedma is a path the follows the river bank and then the Atlantic Ocean shore, connecting points of great interest.
Sea lions and unique beaches in Punta Bermeja From Viedma you can visit Punta Bermeja one of the larges sea lion colonies in the world.
San Blas Bay - Del Jabalí Island San Blas Bay, near Viedma, is a haven for fishermen, but also for those seeking peace when taking a vacation.
A visit to Viedma's farms In Viedma you can learn all about the fruit production in the area, an interesting program for those who come to this region of Patagonia.
Bruce the englishman and a life at sea The story of an Englishman who knows all the secrets of the sea and fishing. He lives in San Blas Bay, 100 km from Viedma.
Old quarter of Patagones: a pleasant stroll through the past Take a tour of the city of Carmen de Patagones and see its historic buildings, some over 200 years old.
The Patagones-Viedma water race. The Patagones-Viedma is a water festival that includes several disciplines, including the second stage of the Grand Prix of International Swimming and High Diving demonstrations.
See all Articles