Camarones is a fishing village which lies 262 kilometers north of Comodoro Rivadavia and 252 km south of Trelew. With 1500 inhabitants, its main activity is fishing and is named after the bay that formerly was a different species of shrimp. 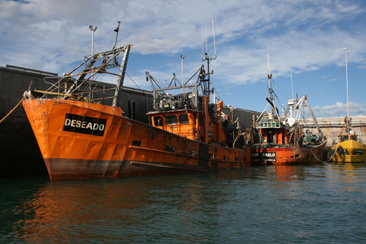 Around 1890 the Spanish used the bay of Camarones for unloading and reloading of fruit and supplies but it was not until 1900 that the town was founded and in 1958 recently acquired the status of municipality.

In 1909 it was created the first rural society in Patagonia and wool production begins to distinguish the country as "camarones wool type". Currently, the "wool camarones" is marketed worldwide.

Camarones was the town where Juan Domingo Perón spent his childhood because of this he is remembered today in the Perón museum. 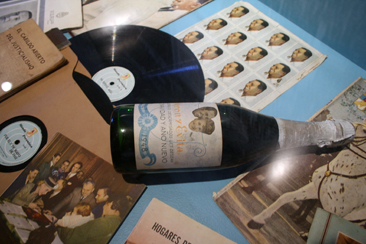 In Perón MUseum you can see objects, photos and memories of the passage of the Perón family throguh Patagonia. Photo courtesy of Agencia Comodoro Turismo.

In the town of Camarones can do several water sports like hiking, fishing trips and diving. You can also walk the beaches or take a city tour and visit places like the Perón Museum or square "Nueva León". Also offer tours to Cabo Dos Bahías, Cabo Raso and farms where you can make photo safaris and whale flora and fauna.

The museum was founded in 2008 in the place where Juan Domingo Perón lived in its infancy. The collection is exhibited in the museum was carried out with the donation of family members and friends across the country. The sample consists of objects, photos and memories of the passage of the Perón family through Patagonia. 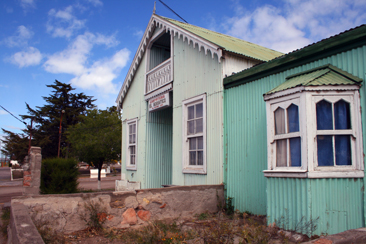 From Comodoro Rivadavia pass 262 kilometers to the north. From Trelew there are two ways to reach Camarones. One is on National Route No. 3 to 252 km you reach the intersection with Provincial Route No. 30, you drive 70 kilometers to the town. The other alternative is to make the journey through the Provincial Route 1, a gravel road in good condition, near the coast from Cabo Raso, declared a historic site.

Penguins in Cape Dos Bahías Cape Dos Bahías Reserve is on the Atlantic coast, 272 km from Puerto Madryn and 30 from Camarones. In the place there is a large colony of Magellanic penguins and guanacos, among other species.
Bahía Bustamante, another option in the coast of Chubut Bahía Bustamante is a seaweed town of only 40 inhabitants located in the Chubut province near the town of Camarones. There are different activities that can be performed depending on the season, weather and tides.
National Salmon Festival Each February it is held in Camarones the National Salmon Festival, a festival that every year attracts fishermen from all over the country and Chile to participate in the fishing contest that is the main attraction of the celebration.
Touring Camarones In Camarones you can find historic monuments, museums and natural sites put up for recreation and enjoyment. A city that combines history with nature, ideal to enjoy a pleasant holidays.
Economic activity in Camarones The economic activities that take place in Camarones are livestock, alghae production and fisheries. Besides, lately it's been making the exploitation of Patagonian tuffs and rhyolites for architectural aims and an employability new pole.
See all Articles