The tree that for centuries nourished and protected the ancestors

Is the symbol of Neuquén. It could almost be said its trademark, although only a portion of the province is covered by them. Its remarkable distinction from other tree and plant species cover the Patagonia making it known where it is seen.

They survive in a very small handful of sites in the world, but alone, against wind and cold, the araucarias have adapted to this land and have won, of course, a place. There, where only the toughest shrubs can withstand harsh winters, these species continue to grow as reaching for the sky with their sharp branches.

But above all things, the Araucaria is the label that illustrates all the postals of Caviahue and that welcomes those who come to this town. 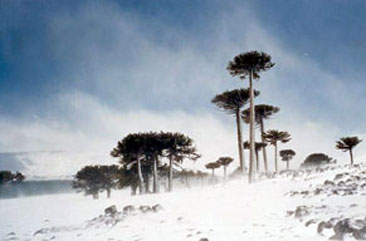 The ancient indigenous, the Pehuenches, knew this tree with another name: pehuén. From there, that the area where most of these forests are is called Villa Pehuenia. The Pehuenches had up to a deity by the name of this species. Is that for centuries it was almost their only food. With its seeds, the piñones, they made bread, wine and even stews.

Later, scientists have discovered that a man would need, at most, 18 trees per year to survive, as they have in the proper proportions the food necessary for proper metabolism.

Araucaria forests grow to more than 1,000 meters above sea level, between Lake Caviahue and the north of Lake Lolog, on both sides of the mountain range. Their growth is very slow, but they can reach heights of 40 meters. It would not be unusual for a pehuen that fed those old araucanos that is still standing, because an araucaria can achieve to live from 500 to 1,000 years. Even some of the earliest specimens of South America have 3,000 years.

And, unlike other vegetables, anyone could easily recognize in this species the male of female. The male pehuén has 5 or 6 branches protruding from the cup, as directed, long, upward, while the female, known as piñonera, gives a pineapple every two years.

The pehuén's wood is of excellent quality, but its use is limited given the rarity of the species. In fact, in 1941 the province of Neuquén created the Caviahue-Copahue Park to protect the pehuenes or araucarias's forests, attractive characteristic of the region.

Although they are the hallmark of Caviahue from its neighbor desert Copahue, its growth is not only gives there. In Patagonia, there araucaria forests in the northwest of Neuquén, between border Arco, Pino Hachado and Mallin de Icalma, but also around the lake Aluminé and volcano Lanín.

To learn more of this ancient species, Patagonia.com.ar proposes you a weekend's circuit by the ancient araucaria forests scattered throughout the province.

Snow and ski slopes in Caviahue, a ski resort for the whole family 1Caviahue has the Mountain Integrated Center where you can perform various winter activities like skiing, snowboarding, hiking dog sledding, snowmobiling and snowtrack.
Footpath to the Agrio river falls There are many places that you can enjoy in Copahue Provincial Park. Among them are the Agrio river falls, the Balcón of the Agrio and the lake and crater of volcano Copahue. These trips can be done on foot, by car or on horseback.
CEARART: a complex for athletes of high performance and for rehabilitation The Center for High Performance in Height and Thermal Rehabilitation (CEARART) in Caviahue proposes to develop a program of medical-sports assistances, of physical and rehabilitation and physical-kinesthetic activities.
Pehuén or Araucaria's Legend The pehuén or araucaria is considered a sacred tree by the legend of Nguenchén of the indigenous Pehuenches.
Caviahue - Copahue: places to enjoy winter and summer Copahue and Caviahue offer activities to enjoy both winter and summer counting ski resorts and hot springs, in addition to beautiful sceneries.
The piñón has its own festival in Caviahue The Provintial Piñon Festival is held every year in March in the town of Caviahue. At this festival you can enjoy various activities and foods.
Torchlight Parade in Caviahue Every Friday during the winter season it is performed a Torchlight Parade in the ski resort of Caviahue.
Volcano Copahue, an unforgettable excursion From Caviahue you can hire guided hikes to the crater of the volcano Copahue.
Snow Kite in the Patagonia This winter the Caviahue Ski Resort will offer as a novelty the possibility of doing Snow Kite, a sport that was already underway in the center but only by experts. Now tourists will have the possibility to practice this extreme sport with the accompaniment of guides and instructors.
Loom Festival in Cajón Chico The town of Cajón Chico, just 10 km from Caviahue, helds in March, the Loom Festival, where there are rodeo skills, exhibitions of works of regional artisans and it is done a great camper dance, among other activities.
See all Articles