Pavón Island is located 3 km from the town of Comandante Luis Piedra, between the main bridge and the secondary bridge over Santa Cruz river. It has an area of ​​2 km and 300 meters wide with some small islands at the ends, and it was discovered by Juan Serrano in 1520.

The Resort offers visitors the chance to spend a pleasant, quiet and at peace stay with friends or family, because it has a fully equipped camping with stoves, tables, chairs, toilets, showers, more cabins, a lodge, a pier for small boats and soccer, volleyball and rugby fields to add sport to recreation and enjoy contact with nature. Both the campsite and the inn are open from September to April the 24 hours.

View of Complex from the Santa Cruz River at sunset.


Among the activities you can perform it is a mini zoo with rare gray and red foxes and pumas distributed in large cages, as well as you can make bird watching. Also it's worth knowing the rudimentary but effective wheel system which brings water from the river to some pools to facilitate irrigation of the site. 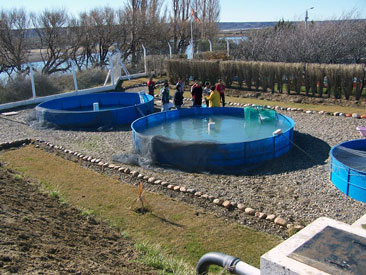 But the favorite place you can not miss in the path of every tourist is the Harengus Municipal Psiculture Station opened on August 14, 1992. It is a rainbow trout farm where you can observe the different stages (breeding, raising, planting, etc.) of the development of the fish and you can take knowledge about the performance of this activity. Therefore, they visit the site several schools as part of the knowledge of a productive activity and the care and preservation of this valuable resource of nature.

The artificial breeding consists in obtaining trout dish or serving size (250/300 grams) after a period of 12 to 14 months of age and after passing the different breeding facilities, they reach consumers who visit Pavón Island. The hatchery is open to the public, you can consult schedules in the direction of municipal tourism. 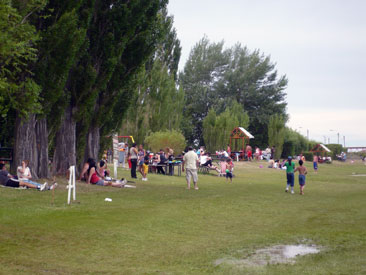 The complex is an area of ​​recreation and relaxation to enjoy with family or friends.

Many choose the Island for its natural setting, which allows to know the flora and fauna of Patagonia and also the Santa Cruz's history by visiting a single Museum with items from the Marine pioneer era, the Commander Luis Piedra, which is installed in the current replica of the original house of his.

The history of the place

Pavón Island is a site that was used as a strategic point for the defense of sovereignty by the Commander, who came to the region in 1859 and built a house on the island and then installed a factory for the purposes of trade and barter with the native people, the tehuelches.

Piedrabuna baptized the island as Pavón as a tribute to Mitre's victory in 1861 and in 1862 this visionary peaked for the first time the flag of Argentina in the place, starting with the settlement of the region at the edge of one of the most important rivers the province.

From the former commander's house are some ruins that have been reconstructed to show visitors the cultural and historical heritage of the town that bears the name of the famous sailor. At the entrance of a house, now a museum, rests the barrel Blaquely, from 1850, which was originally located in Los Estados Island and then was found lost in the weeds by the crew of a ship of the Navy Argentina in 1944 and it was moved to the current location.

The Tourism Office offers guided tours to the historic house and the river, between September and April.

International Steelhead Trout Festival The International Steelhead Trout Festival takes place in late March or early April in Luis Piedrabuena, because this town is considered the "National Capital of Steelhead Trout", for being one of the places in the country where you can find this variety of "heads of steel" trouts in greater numbers and size.
Children's Theme Park Comandate Piedrabuena has a new recreational space for the young ones with the theme of cartoon characters as Patoruzú and Isidoro Cañonez.
Botanical and Recreational Garden Park San Carlos The city of Piedrabuena has the only botanical garden in the province of Santa Cruz and it is the southernmost in the world. There you can live a unique and magical experience learning about nature and its historical context.
Swans arrive to Piedrabuena The sighting of black-necked and coscoroba swans is one of the attractions of the town of Piedrabuena in the month of November because you can see whole families wandering the shores of river.
See all Articles