The National Steelhead Trout Festival takes place in late March or early April in Luis Piedrabuena, because this town is considered the "National Capital of Steelhead Trout", for being one of the country where you can find this variety of "heads of steel" trouts in greater numbers and size.

In 2009 it was held the first edition as the national capital of this species of unique features in the world.

The steelhead trout is in its origin, an anadromous rainbow trout that is born in freshwater, where it remains about two years, and then runs into the sea where it develops. At the age of three they produces marathon runs (or races) upstream to breed, but unlike the salmon, once they succeed, they return again to the sea with very impressive size and weight. 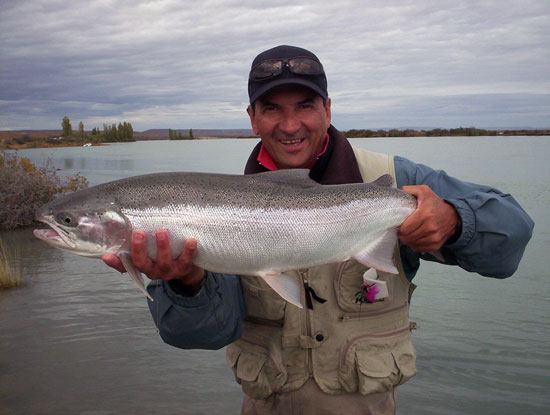 The steelhead trout weighing up to nine kilos. Photos courtesy of Hugo Maldonado.


They do throughout their life up to 6 times the migration cycle with a frequency of spawning very important for this species. That marine stay allow them to have a weight of up to 10 kilos being widely catches between 4 to 6 kg.

It is believed that this species was planted between 1907 and 1909 with eggs from the Sacramento River in California. Santa Cruz River was one of the first to receive the crops, which results were more than successful.

To fish the steelheads in this environment is a challenge because this species is mainly characterized by its large size and aggressiveness, which makes their capture a big challenge, forcing fishing enthusiasts to use the best techniques to achieve unforgettable catch. 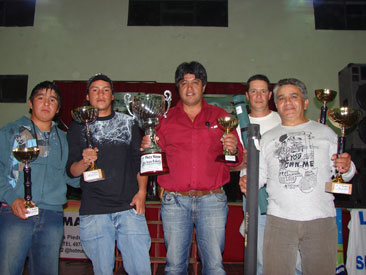 Winners of the 2008 edition. Photos courtesy of Hugo Maldonado.

This magnificent river begins at Lake Argentino, runs from west to east and divides the province into two halves crosswise. Its length is 383 km, its width of 150 meters and has a depth of 3 to 4 meters, with an average flow of 750 mts3. It is the most important river of the province and the second largest in Patagonia after the Negro River. Its origin is clearly glacier and fluvialglacier.

Cmte. Luis Piedra is the nearest town to its mouth on the Atlantic Ocean. It has a watershed of 25,000 km2, navigable throughout its course. It empties in a shaped estuary into the Atlantic, forming a large river with many islands and fixed benches. The Bote river is its most important tributary. The Santa Cruz river is fed by precipitation (snow and rainfall) in its glacier headers of the continental ice field. The peak flow is between November and March and the dry season in September. 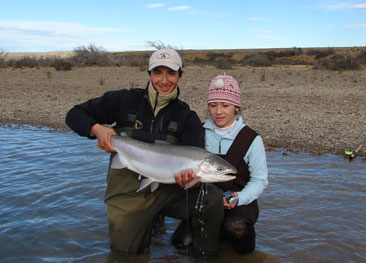 In the 2008 edition there were many participants in the minor category with more than 60 children. Photo courtesy of Hugo Maldonado.

One of the main objectives of the feast, according to its organizers, is to promote this species so unique and it has attracted the interest of not only fishermen but also researchers. Such is the case of the biologist, Dr. Miguel Pascual, who has studied the migratory behavior of this variety.

On the other hand it seeks to position the town of Cmte. Luis Piedrabuena as an almost unique place in the world where fishing lovers can meet all their expectations.

The Festival is an arts festival, an exhibition of regional and fishing products, tying and throwing clinics, lectures, a photographic exhibition, a contest of dishes (typical dishes), coffee concert, tours and closing with the election of Queen of the Fishermen.

There are raffles and contests in which important prizes are given. The contess are "The Treasure Hunt" and other questions and answers relating to the "History of the Steelhead". Furthermore, and as each year, it is held a planting of fingerlings in which children can participate.

The modalities that can participate in the competition are Spinning and Fly Cast and the categories are: individual, team and minors under 14 years.

For more information contact the Municipal Control Center of Spors Fishing and Environment to the telephone (02962) 15408790, email: fiestadelatruchapb@hotmail.com

Pavón Island Resort Pavón Island is located 3 km from the town of Comandante Luis Piedra, between the main bridge and the secondary bridge over Santa Cruz river. The Resort offers visitors the chance to spend a pleasant, quiet and at peace stay with friends or family.
Children's Theme Park Comandate Piedrabuena has a new recreational space for the young ones with the theme of cartoon characters as Patoruzú and Isidoro Cañonez.
Botanical and Recreational Garden Park San Carlos The city of Piedrabuena has the only botanical garden in the province of Santa Cruz and it is the southernmost in the world. There you can live a unique and magical experience learning about nature and its historical context.
Swans arrive to Piedrabuena The sighting of black-necked and coscoroba swans is one of the attractions of the town of Piedrabuena in the month of November because you can see whole families wandering the shores of river.
See all Articles