Perito Moreno Glacier, what you need to know See map

Every year the Perito Moreno glacier generate expectations in the world relative to its breakup. Some data on its characteristics and its history will help us understand this phenomenon.

Los Glaciares National Park was created in 1937 for the preservation of the glaciers and was declared a World Heritage Site by UNESCO to preserve its flora and fauna in danger of extinction. 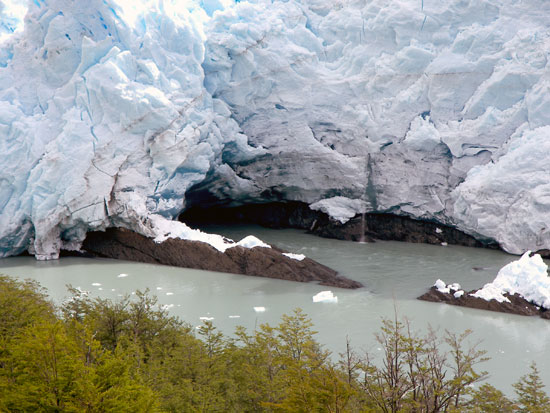 Part of the glacier image. Photo courtesy of Jan Zkelj - Sec. of Tourism

Glaciers play an important role in our day, occupy 10% of land surface and account for 90% of the world's freshwater. And with the air and water flow that create, contribute to balance the Earth's climate, which without them would be suffocating.

There are many myths and comments on the Perito Moreno glacier and its behavior that every year surprise and invites tourists from around the world. But to begin to understand, we must ask:

What is a glacier?

A glacier is often compared to a river of ice because it have tributaries, erosive capacity and greater speed in the middle of the channel than at the edges. But the movement of ice, like all bodies, follow the laws of gravity and very specific behaviors that have little in common with the water. 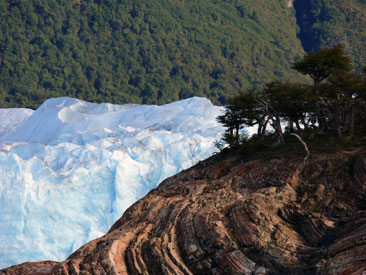 The ice of glaciers is the result of compression of the snow effect of its own weight. For the formation of a glacier takes large snowfall and the average annual temperature for retaining snow. The snow is compressed and accumulates in layers that are compacted and by the weight it form the ice.

The time required for the formation of ice from the snow varies greatly from one glacier to another depending on two factors: the snowfall and temperature and can range from a dozen years like in the alpine glaciers or glaciers from Patagonia or several hundreds of years like in Antarctica.

The important thing to know about the glacier is that is not only a mass of ice, but above all, a mass of moving ice. And as every body in motion, the ice is influenced by gravity. Because of this similarity with water the glaciers are compare to rivers which, if it is not entirely false, in light of recent studies also doesnt' seem to be quite true.

A glacier is only a glacier if it moves and to start to move the ice needs a certain thickness of about 20 meters. From here, three factors will condition the forward speed of a glacier: the thickness, slope and ice temperature.

The glaciers covered in the last great ice age about 18,000 years ago one third of the landmass, which was 3 times its present size. Sea level then dropped 120 meters, with the result that large areas now covered by sea water, were then dry land. In southern Patagonia, the first ice age that left clear footprints was 3.5 million years ago and at that time, the ice extended at least 60 km east of the Andes today.

The glaciers from Patagonia are named after Perito Moreno since 1899. But the story tells that Perito Moreno has never seen the glacier, despite having been very close his exploration in 1876 because the glaciers are never mention in his report. 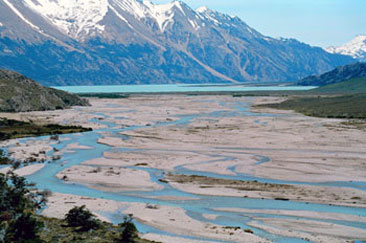 In 1879, John Thomas Rodgers, English captain of the Chilean Army, would be the first explorer to mention the glacier and give it a name: he called glacier Francisco Vidal Gormaz in honor of the Director of the Navy Hydrographic Office in Chile. Years late Hauthal attached to the Argentinian Boundary Commission would call it Bismarck in honor of Prussian Chancellor. That name that still appears on some german and chilean maps. But Lieutenant Iglesias in a studio appointed by the Argentine Hydrographic Institute definitely named the glacier Perito Moreno.

The breaking of the Perito Moreno Glacier is one of the most impressive natural phenomena that have been seen in recent times. The various breakdowns show that there is a cyclic parameter in the Perito Moreno:

It is often said that the rupture of Moreno is a phenomenon that repeats cyclically every 3 or 4 years. As discussed above, this only occurred regularly in recent years. Just look at the list of breaks to see how wrong is that idea. 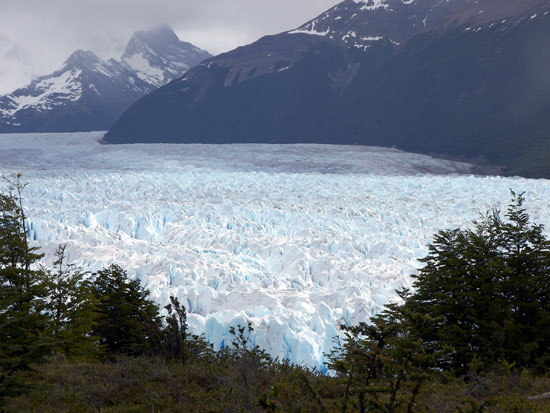 In this image you can see the flora around the glaciers. Photo courtesy Jan Zarekj

It covers an area of ​​6,000 km2, covering part of the Continental Ice and all the glaciers that from them descend to the eastern side.

Perito Moreno Glacier: the eighth wonder of the world 1The Perito Moreno glacier is considered the eighth wonder of the world because of the spectacular views it offers. The imposing mass of ice surrounded by endless forests and mountains is a spectacle that few want to miss when traveling to Patagonia.
The periodic breaking of the Perito Moreno Glacier The Perito Moreno Glacier is an active glacier. It is one of the few advancing glaciers in the world, and the only one in Patagonia. It advances approximately 100 meters per year, generating another phenomenon of shoking beauty: the breaking of the dam it forms in the brazo Rico of Lago Argentino.
Punta Bandera Naval detachment The Punta Bandera Argentina Naval detachment is located 45 kilometers from El Calafate. Since its creation in 1978, the detachment provides professional services.
The legend of the calafate The tehuelches lived in the El Calafate area and had a legend about the birth of the bush that gives the name of the town. "He who eats calafate will always return"
Los Glaciares National Park The Perito Moreno glacier is near El Calafate, a territory ruled by eternal ice. The entire area is inside Los Glaciares National Park, created in 1937 in order to preserve the continental ice field, its thirteen glaciers and various sub-Antarctic forest environments and the steppe of Patagonia.
Glaciers, forests and mountains There are infinite possibilities for those who tour the glacier region. On foot, by car or by boat, all are good options to explore this unique area of ​​Patagonia, Argentina.
Ice Festival in Calafate For three weekends in a row, in July and August, the Ice Festival is held in El Calafate. True to its name this festival pays tribute to ice with skating, ice hockey, torchlight parades, sleds, sculptures and a "Chueca" match, a very popular sport typical of the area.
Lake Argentino Lake Argentino is the largest in Patagonia with its 1,560 square kilometer, and the third one in South America. At 185 meters above sea level, it has a length of 125 km and a maximum width of between 14 and 20 kilometers.
Trekking on the Perito Moreno Glacier 2Walking on the glacier Perito Moreno is a fascinating opportunity that is suitable for all and does not require much effort.
Glaciarium, the Museum of Ice in Pataognia El Calafate has the first museum of ice in the country and Patagonia showing entertaining scientific information on the history of ice, glaciers, flora and fauna.
See all Articles