A comprehensive book on La Trochita appeared in December 2001, which tells the story of this little train of international fame and reveals the hidden secrets of the legendary steam locomotives, which also circulate in unthinkable places throughout the country. 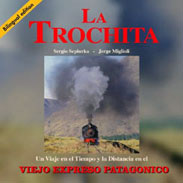 It is a journey through time and distance on the Old Patagonian Express La Trochita, whose meticulous full-color bilingual edition of 170 pages was prepared by the editorial Grupo Abierto Comunicaciones (GAC).

The authors, Sergio  Sepiuka and Jorge Miglioli, have made from Esquel (Chubut), where they reside, an exhaustive recording countless testimonies that provide a broad overview of the past, present and future of this branch, which has been declared a National Historic Monument.

The book contains a presentation by former Minister of Tourism, Culture and Sport of the Nation, eng. Hernán Lombardi, and a moving text by Joan Manuel Serrat, who links Utopia to Patagonia and together with an attractive prologue, they anticipate the three main parts of the work, whose back cover also contains brief comments by the historian Felix Luna and the journalist Pancho Ibañez.

The first part: "Historia del Ramal de Trocha Angosta Ingeniero Jacobacci-Esquel" is the result of a rigorous investigation. There are explained further in an entertaining and accessible way the technical characteristics of small locomotives Baldwin (U.S.) and Henschel (Germany) which, together with wagons Familleureux (Belgium), passed through various parts of Patagonia and even the north of the country. The origin and fate of the 81 machines purchased in 1922 still reveals hundreds of train fans worldwide and, thanks to the valuable evidence recovered, the book provides a clear but unusual response to many questions. 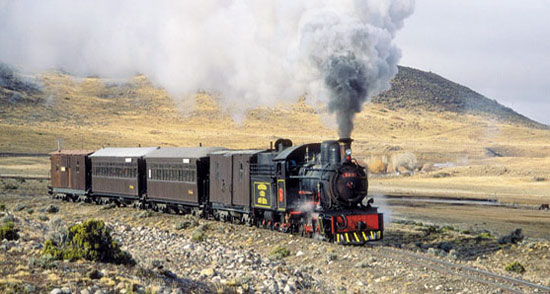 
The second part of the work:

"El espíritu del Sur", contains a wide and varied set of personal and literary evidence very carefully selected. There, apart from the experiences of many players past and present of La Trochita, are included short stories by renowned writers-travelers from various latitudes and the testimony of the governor of Chubut, José Luis Lizurume.

Finally the third part of the work:

"En Marcha" refers to the enhancement of the stretch Esquel-El Maitén and an overview of the Museum Leleque, which can be visited in La Trochita traveling across the vastness of the steppe, "breathing Patagonia on all sides," as Luis Sandrini once said from the unforgettable movie screen.

All local color spills over the pages of this excellent book, so much in the warm black and white photos of the early years, in its stringent and clear maps, and in the most recent and splendid photographs which also show the beautiful sceneries of the region. To enjoy and learn at the same time.