This reserve, created by the province of Río Negro in June 1993, is an area that includes San Antonio Bay from the Lighthouse Baliza San Matías (in the area of ​​Port San Antonio Este, 60 km from Las Grutas) to El Sótano (12 km west of Las Grutas), including nearly 45 km of beaches. The reserve includes the area up to 50 meters offshore from the high tide line.

The beach plover performed the feat of flying each year from Tierra del Fuego to the North Pole.

The coasts of San Antonio in the Patagonia is visited by migratory beach plovers in groups of hundreds of thousands who make their annual journey round trip from Tierra del Fuego to the North Pole where they nest.

Such a feat requires having the "fuel" necessary in the form of fat to reach the next way station at 1000 km, 3000 km and 5000 km of distance traveled nonstop. However, they can only get proper food in sufficient quantity to bring these reserves on a few key sites, wetlands.

Wetlands are flooded environments, covered by shallow water and are the most productive ecosystems on the planet. They contain small worms, crustaceans and molluscs, which proliferate at the right time and allow these animals to eat and accumulate fat in the body (double and even triple their weight), which will be used as fuel for migratory flight.

The area is used by 17 species of migratory shorebirds, among highlights the Red Plover and nine other species that nest and breed in the Arctic Circle, in the northern hemisphere and the Antarctic pigeons among those which are reproduced in Antarctica. 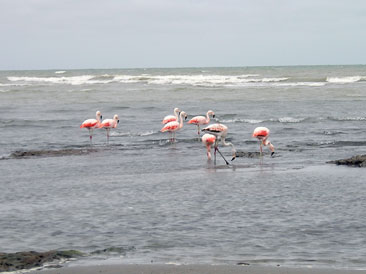 Wetlands are sites where thousands of birds derive their food and that have been disappearing from the planet.

The province of Río Negro decided to name the bay Nature Reserve to protect its wetlands, sites where thousands of birds derive their food and that have been disappearing from the earth's surface at a rate of half a hectare per minute.

The conservation of beach plovers depends on many people in many countries, because when one link breaks, the string is cut. So the Río Negro province of Patagonia decided to create the protected area "Bahia de San Antonio" and later joined the international conservation efforts in the area requesting recognition to "Net Hemispheric Shorebird Reserve", thus becoming a site of worldwide importance.