The warmth and transparency of the waters of San Matias Gulf and particularly the Bay of San Antonio and its zone of influence, are due to a combination of oceanographic and atmospheric aspects, with the peculiar geographical conformation of the coastal zone. The amplitude of the tides, the circulation system of coastal currents, high summer temperatures and lack of rainfall are contributing factors to this phenomenon, unique in the Patagonia.

Tides are cyclical movements experienced by the sea level and that are reflected particularly on its coasts. Originating in the gravitational pull that the moon and the sun exert on the mass of ocean water, the tides in this area experience daily changes in sea level of between 6 and 9 meters wide. This difference in level determines that the entire surface of the Bay of San Antonio is flooded twice a day and is also dried a lot of hours per day.

The high temperature in the summer months leads to greater evaporation of water entering the Bay of San Antonio, resulting in a greater accumulation of salts in the body of water in the system. 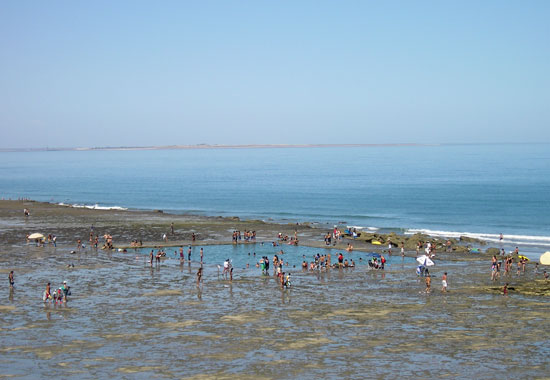 The extensive beaches of Las Grutas allow the formation of pools for the kids and their safety.

The marked difference in salinity and temperature with water from the streams of general circulation in San Matías Gulf (colder) and the flow direction of these coastal currents outside the bay, determine that the water exchange between the two masses is minimal. Thanks to this combination of factors, the same body of water is recycled and repeatedly circulated in the coastal system of the Bay of San Antonio and surrounding area.

These unique properties water are along the coasts of the tourist area San Antonio/Las Grutas in the Patagonia. So the beaches are unique: the beaches of warm waters in the coast of Argentina.

Diving in Las Grutas: a clear experience The clear, warm waters of Las Grutas make the city a suitable place for diving.
Fishing in the San Antonio Oeste - Las Grutas area 1In Las Grutas and San Antonio Oeste in Patagonia you can go boat fishing or from the beach.
San Antonio Bay Nature Reserve San Antonio Bay is one of the most important ecological reserves in Patagonia, covering about 50 km, between Las Grutas and Puerto San Antonio Este. In its wetlands, migratory birds rest and find the food necessary to survive.
Fourtrax tours in Las Grutas Fourtrax rides are a classic that you can't missed at the time to meet Las Grutas and its surrounding areas.
The only shellfish hatchery in the country is in Las Grutas Criar is the hatchery of the Institute of Marine and Fish Biology located in Las Grutas. The complex was opened in March 1997 to investigate the techniques that can be employed there.
Fort Argentino: a place to discover A few kilometers from the beaches of Las Grutas there is a special place where to experience an adventure, Fort Argentino. Its landscape, its history, its mystique, all manage to amaze the tourists who visit Patagonia.
National Blue Gulf Festival 1The Blue Gulf Festival and the Tide Festival are celebrated in Las Grutas in the month of February. You can enjoy free live shows, sports and other activities.
Las Grutas: beaches, fishing, tours and more For those looking to stay away from the beaches of Las Grutas, you can find a few kilometers away several different activities and places to visit.
Camping in Las Grutas Information and tips about camping in Las Grutas, the larges beach in Patagonia.
Kayaking and Windsurfing in Las Grutas In Las Grutas there are two fun options to enjoy the sea. Both kayaking and windsurfing can be done in the local sea school.
See all Articles