Criar is the hatchery of the Institute of Marine and Fishery Biology "Almirante Storni" and is home to the Mariculture Area of San Antonio Oeste. 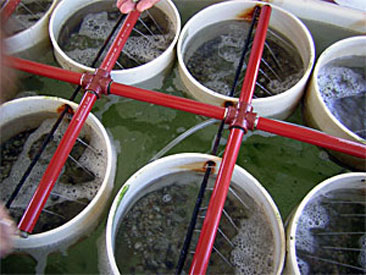 Molluscs being fed for fattening.

The complex that was opened in March 1997, is located on the northwest coast of San Matías Gulf, 3 km from Las Grutas, on km 12 of Provincial Route 2.

It is the only shellfish hatchery in the country, working in a team composed of biologists and technicians. The main objective of the place is to promote the development of mariculture (farming aquatic animals and plants) in the Río Negro coasts and the rest of the Argentine coast.

"Criar" is responsible for reproduction and production of marine species and seeds of bivalve molluscs (oysters, mussels fair, tehuelche scallops and mussels palette). They have a greenhouse system for the production of microalgae and a homemade recirculating seawater for use in sea bream broodstock conditioning.

The work plan of the farm is based on three native species: 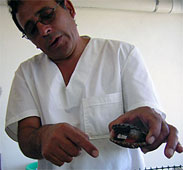 During the visit, technicians explain which type of mollusk is raised.

Criar professionals base their care on the reproductive biology of marine species of commercial importance.

Another goal is that aquaculture as farming systems be disclosed by units of exposure. The way to do this is with closed high control and low impact systems. Using the research and use of technology for production of shellfish seeds, fish in hatchery and fish farms.

Experts of Criar are convinced that aquaculture is a sustainable alternative in a world that inexorably overexploitate aquatic resources. This system reduces fishing pressure, responding to growing global demand for aquatic products.

Criar opens its doors for training educators, professionals, technicians and producers to outreach projects and it also has a permanent exhibition of the sea open to the public. 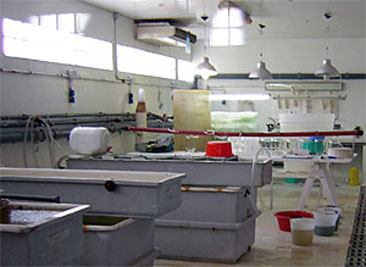 There is a section where are exposed the techniques used in the hatchery.

Cepari: where are stored algal strains used to perform mass crops to feed the broodstock, larvae and postlarvae.

Central nave: in this room is done broodstock conditioning, larval setting and fattening of post-larvae.

Schools, public and private institutions, tourists and general public have the opportunity to see and learn about the work of researchers at the site through guided tours by trained personnel. There is a section within the hatchery dedicated to exposing the activities of production.

The route is done following the phases of production from the production of microalgae for feeding, broodstock conditioning, larval cultures, fixation and subsequent larval metamorphosis and seed pre-fattening systems of vertical circulation.

It is a complex of 700 m2 covered, consisting of farming areas, greenhouse production of microalgae, tanks, engine room, pools, laboratories, offices and showrooms.

To the building comes seawater through a pipe connected to a submersible pump. The seawater is pumped and stored in 3 ponds for later use of the hatchery.