The town of Las Grutas has a privileged place for diving in the sea. This is the Don Félix Underwater Park, established in 2007 to be a tourist attraction in the region. 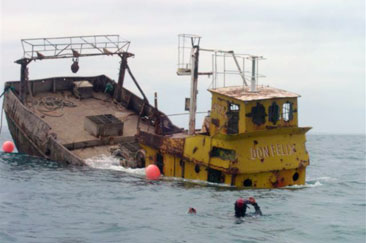 The park is located off Las Coloradas, about 5.5 km from the coast between 22 and 24 meters deep and has an artificial reef created from the sinking of the Don Félix ship, what happens becuase whatever you throw into the sea generates life. Thus, increasing the amount of flora and fauna in the area because the species use it as a repair as explained Claudio Barbieri, a professional diver in the city.

The ceremony of sinking of fishing ship was in November 2007 with a large audience present. The transfer of the ship required a large team operator and at time of sinking the fishermen who worked on the boat gave him a greeting.

Diving in the deep ocean near the artificial reef full of marine life is one of the most rewarding experiences for divers from all over who come to Las Grutas. Don Felix Underwater Park is undoubtedly one of the main attractions in the area and a unique activity to do.

The managers of the initiative dream about expanding the park by sinking other vessels, such as those that are stranded in the fishing port of San Antonio Oeste.