Occasionally a specimen will cross paths in Patagonia and causing the traveler's comments. It usually said its ability to hit a spit and a few, very few talk about their past support of the Indians. But what few know is that today, its wool is more valuable than cashmere and began to legally marketed only in 2000. 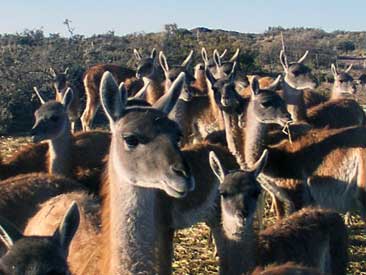 The guanacos were for many years only the difficult postal of Patagonia and to the producers the number one predator. Therefore, it was to hunt up to 100 animals per day. But the June 1, 2000, in a tender made in Los Menucos, it was paying $ 111 a kilo of its hair changing the fate of the guanaco forever.

What happened in between?: A project of Río Negro producers seeking an alternative to sheep. And the answer was close at hand.

Unlike sheep, one of the foundations of the economy in Patagonia, the guanaco is native to this region. Since well before colonization, the Indians used it for their livelihoods, their meat and wool. But the introduction of the sheep made disasters among its population, since farmers believed that the guanaco was a competition for the sheep to eat the same thing.

In 2000, while others exterminated, David Garrido, Estancia El Chacay in Los Menucos decided to give a sustainable use. He had to jump over obstacles to exploit own endangered species. Finally, and with three producers who joined his crusade for the guanaco, it managed to export the first legal kilo of this camelid wool. 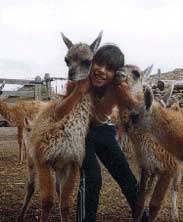 A boy with guanacos.

144 kilos were exported to 111.30 pesos each when sheep wool cost 2 pesos. Countries like Canada and Italy, discovered the finesse of the guanaco hair. And in Patagonia, was an eye-opener for many farmers who had agreed with predation and can not imagine the value that could come to have this native animal.

Why is it so valuable? The guanaco hair, ie the finite hair that stays then disassemble the wool is 14 microns in diameter, while the sheep is 18. That makes him a very fine hair, even more than cashmere, which is 15 microns. They believe that making a fine selection, you might even arrive at a better wool than vicuña (the finest at this time). In addition, the guanaco as an added value has to be seen as an alien species in the rest of the world.

But the tender that took place in Los Menucos was important not only for the price of the wool, but it was the first legal sale of guanaco wool was done in history. So far, not only were exterminated by the producers, but they were caught hunting illegally to sell their wool.

National Slab Stone Festival in Los Menucos The National Slab Stone Festival in Los Menucos makes honor to one of the engines of its economy and those involved in the slab stone mining.
Rural tourism in the South Line Very close to the plateau of Somoncurá there are farms where you can make rural tourism. Los Menucos offers different places to learn about the lifestyle of the region and enjoy nature.
Circuits to meet Somoncurá Plateau In Los Menucos there is a group of producers who are responsible for conducting tours to learn about the Plateau.
Somoncurá Plateau Somuncurá Plateau lies between the south-central province of Río Negro and the center-north of Chubut, divided by the 42° parallel that separates the two provinces of the Patagonia, Argentina.
See all Articles