The Provincial Museum of Natural Science and Oceanographic in Puerto Madryn opened its doors in 1972 after the building in which it is was donated to the province of Chubut by relatives of the former owners, the Pujol family.

It started with a exhibition of the flora and fauna of the area with some exotic species and in 2004 the government of Chubut began its restoration to preserve collections and salvage the heritage value of the building.

Today the museum offers an exhibition of nature and its relation to man, the show is named "El Hombre y el Mar".

"The account of the exhibition allows you to see Nature in constant process of change and movement, in its own dynamic. Moreover, the incorporation of men, not as a mere spectator but as the protagonist, revitalizes the undisputed reciprocal action."

The Tehuelches lived in the XV and XVI centuries in Patagonia. As they worked with the stone, in this room you can see items that they used to hunt as arrowheads and bolas. 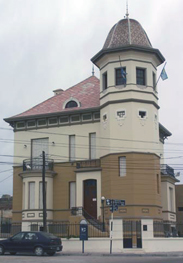 The exhibition of the museum is within one of the city's historic buildings, the Chalet Pujol.

The Europeans, in their eagerness to explore the world, took to the seas and arrived in Patagonia meeting the Tehuelches who called Patagones. This room recreates the legends told by the Europeans in their journey across the sea such as the presence of sirens product of hallucination due to be many days appreciating only the ocean water.

In the XVIII and XIX centuries Europeans reached the Patagonia. But this time, instead of creating legends and myths, they began to explore the area, classifying species, studying their relationships. The scientist best known that passed by these lands is Charles Darwin. In this room you can see the accounts of travelers of those times.

The "National Project" was by which Patagonia was explored with the aim of defining the national territory. In this room there are mentioned the most important scientists of the time like Perito Moreno.

In this room can be seen signs of the destruction of predators that do not respect nature, it is a way to raise awareness about the importance of this for us. You can also see samples containing archaeological and paleontological fossils of tree trunks, leaves with imprints of fish, among others.

Within this room there is a display of photographs of children, each with his name and surname. It is a way of showing the different nationalities and cultures living in these lands. Cultural diversity was due to immigration and the mixing that occurred with the natives of the place.

These rooms exhibit the silver used by the natives to dye wool or make remedies to cure illnesses. It is also shown loom fabrics and dyeing of leather.

Here are the elements used by fishermen to carry on business in the San José Gulf.

Finally, the museum has a lookout on the top floor, from which you can see the whole city of Puerto Madryn and its coast. It also has a room for temporary exhibitions and a library.