The city of Puerto Madryn belongs to Biedma Department of the province of Chubut. It was founded on July 28, 1865, date of arrival, aboard the Mimosa sailboat, of the Welsh settlers to the coast of Chubut in front of what is today the city.

Its geographic coordinates are 42° 8' south latitude and 65º 5' west longitude on the Nuevo Gulf. This in an arid region and the marine influence contributes to lower rigor temperatures.

The extension of the municipal lands is 33,000 hectares, of which the residential area occupies 850 hectares and 800 hectares its industrial zone. 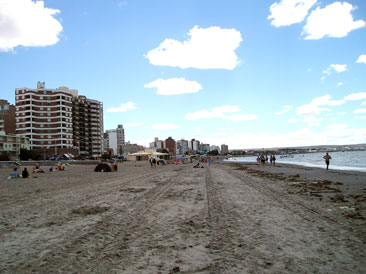 In Puerto Madryn you can enjoy the extensive beaches.

Puerto Madryn is one of the most vibrant cities in Patagonia because it gathers various economic activities: its deep-water port allows for intense fishing activity, the city produces aluminum at its ALUAR plant (Aluminio Argentino SA), and it has a vibrant tourism industry. This city is a pioneer of underwater activity in the country and is a support point for visiting the surprising and unique Peninsula Valdes.

The city of whales

The Nuevo Gulf was known by English sailors and it was neatly relieved by Admiral Fitz Roy people from 1826 to 1836. Moved by the organization of Lewis Jones (typographer), Edwin Roberts and Captain Sir Love Jones Parry (Madryn Castle in Arfon, hence the name of the port), the July 28, 1865 arrived at the Nueva Bay 153 Welsh.

Although few of them were peasants their goal was cultivate the lower valley of Chubut River and therefore they stay in the port was short. In a few months they moved to the riverbanks where they dedicated to the cultivation of wheat.

The railway line Trelew - Bahía Nueva, the start of the fishing early in the century and the establishment of ALUAR cemented in the seventies an uninterrupted strong growth.

View of the city from the Atlantic Ocean.
Share