Few places in the world offer the possibility to observe in their natural environment so much animals. 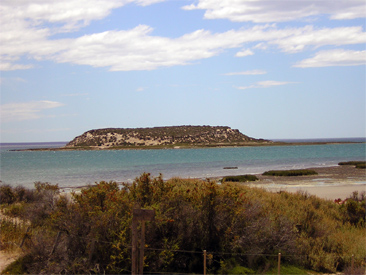 De los Pájaros Island next to the Carlos Ameghino Isthmus.

Valdés Peninsula, on the Atlantic Ocean, and 77 kilometers from Puerto Madryn is one of them. Giant whales at few meters, sea lions and elephant seals, penguins, numerous birds, guanacos and other terrestrial species are concentrated in this Nature Reserve of 360 hectares where almost there aren't no stars and more people than these.

So remarkable is the population of wildlife, that the UNESCO declared the site "Patrimony of Humanity".

The entrance to the peninsula is a delight for the senses. After taking the Provincial Route 2 from Route 3 or from Puerto Madryn, we reach the isthmus "Carlos Ameghino" that connects the peninsula with the mainland, and where water flanking both sides of the road.

In both the right and the left you can see the blue immensity of the Patagonian sea. On one hand, the Nuevo Gulf, and on the other the San Jose Gulf. If you lower the car window, you can even hear the squeaks of noisy birds that live close by in the De los Pájaros Island, which seemed to welcome you to the place.

The beaches of the Peninsula invite you to stop and enjoy.


At that point, gateway to the Integral Reserve of Peninsula Valdes, one must stop to pay a ticket. There is the Interpretation Centre F. Ameghino and Fort San José Regional Musuem, ideal for in-depth information on places to visit and its geography, flora, fauna and history.

From here you can make a small detour and visit the De los Pájaros Island or go deep into the peninsula.

After about 25 kilometers on a typical steppe, it opens suddenly a heavenly range between golden cliffs. This magnificent view corresponds to Puerto Piramides, the only settlement of the reserve population and one of the most privileged sites to observe the famous southern right whales. These giant mammals come south in June and until December inhabit the gulf waters to breed and give birth to their young.

The fine golden sand of Pirámides invite you to sit on them and, simply, watch the sea or the occasional whale near the shore, or walk along the beach in search of most rare snails. From there you can continue traveling to the various wildlife reserves or rent a diving excursion. But what few people lose are the closest whale sightings.

Ecocentro: a place to discover the sea Ecocentro in Puerto Madryn is an institution dedicated to the study of marine life.
Diving in Puerto Madryn 2Puerto Madryn is a great place for diving. Clear waters and well organized tours entice newcomers to the city, even those already experienced in the activity.
Punta Tombo: a colony of penguins, to enjoy up close Punta Tombo is the largest community of penguins in Patagonia. Once a year they come to nest and have their young. It is located 180 km from Puerto Madryn.
Punta Loma: Natural Reserve A large reserve of sea lions of a hair can be found only 17 km from Puerto Madryn. Must do opportunity to meet them.
A day in the ranches of Patagonia, near Madryn From Puerto Madryn and Puerto Piráamides you can hire a tour that allows you to approach the culture of the countryside in Patagonia. Half day to participate in various activities of a ranch.
Visiting the Florentino Ameghino Dam from Madryn The Ameghino dam is a frequently ignored place, which is worth visiting. In the lake surroundings you can camp and practice different sports.
Cultural activities at the Ecocentro The Ecocentro of Puerto Madryn seeks to combine art, science and culture and in this framework it provides concerts and shows.
National Cordero Festival in Puerto Madryn The National Cordero Festival is a celebration to taste some traditional dishes of Patagonia and enjoy rodeo shows.
What to do in Puerto Madryn Puerto Madryn offers tourists plenty to do outdoors and also wildlife tours in order to enjoy the area.
Madryn Al Plato: The foods of Patagonia. Each winter the event takes place the gourmet event Madryn al Plato. It gathers leading experts to give workshops and classes. There are also tasting local dishes. It will be held on July 25 to 30, 2011.
See all Articles