Who claim that Río Gallegos is the gateway to Patagonia Austral are not wrong. Starting point for all tours, it has become the tourist center of excellence scale. 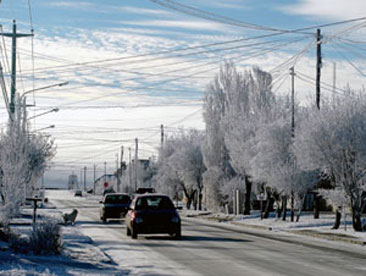 In winter the streets are dressed in white.

But Río Gallegos is not only a central step. Its history, great cultural movement and nearby natural attractions make it a major tourist center.

The town is situated at the mouth of the river with the same name, is the capital of the province of Santa Cruz and head of department Güer Aike. It has just over 80,000 inhabitants.

Its geographical position, determines a mild dry climate with considerable temperature ranges to be in the cold temperate region of the country. Temperatures range from -15 °C in winter and 25 °C in summer. The winds are constant, as can be expected in Patagonia, where gusts can reach 120 km/h in its worst days.

The first historical news of the current Río Gallegos back to the mission of Jofre de Loaiza in 1525, when he reached the river ldefonso (now Gallegos river) and to the one led by Simón de Alcazaba in 1535, who first called it Gallegos. 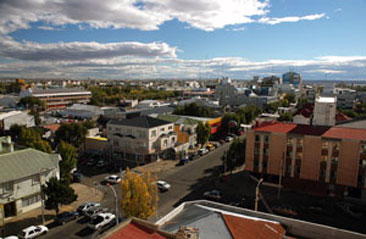 The first signs of population are higher. The particular precedent comes from the administration of Carlos Moyano, who in 1883 was appointed governor of Santa Cruz territory.

Río Gallegos born, finally, to settle there the maritime sub-prefecture in 1885. Its fate was apparently very modest but it has a very important purpose so that indicating a willingness to maintain and exercise Argentine sovereignty over these distant lands. 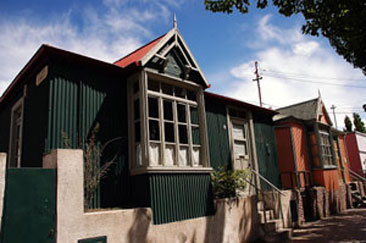 Part of the distinctive architecture of Río Gallegos.

Currently Río Gallegos, is the second largest city in the Patagonia coast and the largest in the province. 13 km from the coast and 38 km along the National Route 40 is the last continental deepwater port, President Arturo Illia, turning the city into an important industrial and commercial center.

As the largest city of the province, it has important receptive equipment ranging from three star hotels to hostels, apart hotels and 2 campings. Also, the dining options are numerous.

In the city you can walk the waterfront, visit museums or simply stroll the streets enjoying the intense commercial, cultural and recreational activity. 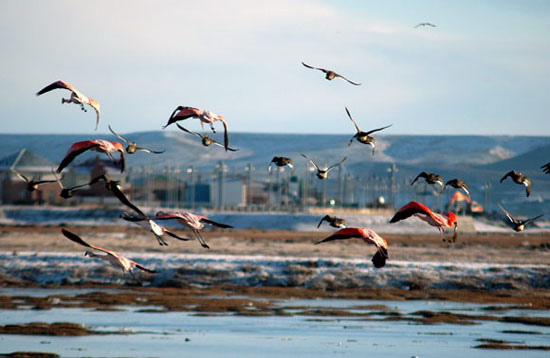 Beside the port you can see variety of birds including flamingos. Photo courtesy Horacio Cordova.

From the north of the country, Río Gallegos can be reached by National Route 3, which binds the entire Atlantic coastal axis ending in the province of Tierra del Fuego. The International Airport is located 7 kilometers from downtown and operates several companies linking this capital to other destinations in the country. 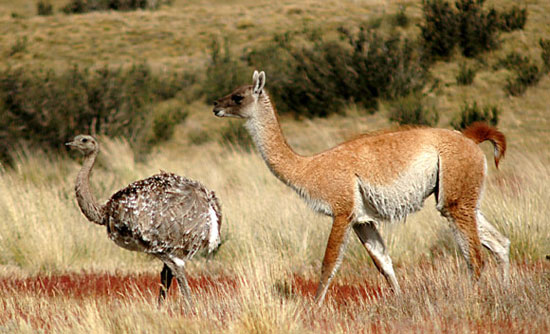 
Information provided by Secretary of Tourism of the town, located on Roca Avenue and Cordova. Phone: (+549 02966) 436920. Mail: turismo@riogallegos.gov.ar

Cape Vírgenes Nature Reserve From Río Gallegos you can visit Cape Vírgenes in Patagonia. This is one of the main colonies of Magellanic penguins on the coast of Argentina and it also has the distinction of being the southernmost point of continental Argentina and America.
City tour of Río Gallegos Rio Gallegos offers an organized city tour to visit its many beautiful places.
Magellanic Penguins Magellanic penguins (Spheniseus magellanicus) spotted by the first Europeans in Magellan's voyage in 1520 were described by the chronicler Antonio Pigafetta as "strang geese." It is one of the few flightless birds and their wings have become flippers in order to swim.
The Eduardo Minnicelli Atrs Museum On November 1st 1996 in the city of Río Gallegos oppened the Arts Museum "Eduardo Minnicelli". It is the first in the province and the southernmost in its specialty.
Argoturism: Hill Station tourist farm From Río Gallegos out by the National Route 3 heading east to reach Güer Aike after 27 km. From there continue on National Route 3 north 6 kilometers where there is a junction with Provincial Highway 55, gravel road that runs along the north bank of Gallegos river. Follow it about 30 km to the Hill Station.
Grandma Paredes' House, a city attraction In Rio Gallegos you can visit the historic monument dedicated to Grandma Paredes. She had the house on the wharf that had the first telephone in the city. Today it is a historic monument that can be visited.
What to do in Río Gallegos Río Gallegos is a strategic point of Patagonia. Visitors to the city can find many attractions to enjoy.
Stone Crosses in Patagonia A stone cross is a monument that is built and rised towards a homage or devotion. Usually they are religious and are located in public places, mainly in crosses at churches and roads. In Río Gallegos one was rosed to the memory of the founders of this town.
To Punta Loyola from Río Gallegos Punta Loyola is located 37 kilometers west from Río Gallegos and is the point where the Argentine sea joins the ria of Gallegos river. It is also the final point of the traditional National Route 40 that crosses Patagonia.
See all Articles