This house was the only front the wharf that had a phone, the first of the city. Grandma Paredes worked selflessly noticing when ships arrived, harboring sialors and providing the sheds of her house as a deposit. Today is a historic monument and it can be visited.

In 1909, it came from Spain, Domingo Paredes in search of work and a place for his family. Fate brought him to Río Gallegos, where a landowner offers him to stay in a small house to care for his livestock.

In 1910, in the centenary of the Revolution of May and having obtained employment with the Sociedad Anónima he brings his wife Isabel Cerda and his oldest son Fernando. 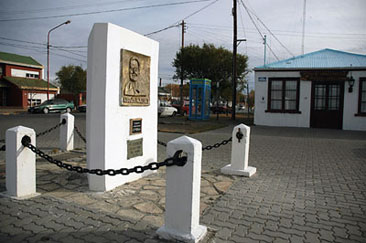 Memorial made to Grandma Paredes.

Isabel Cerda of Paredes, was mild-mannered, bright eyes, intelligent and kind. She was noted for her honesty in advising and was always ready to lend a hand to those in need. Over the years, Isabel, born in Valencia (Spain) would be known as "Grandma Paredes".

The house was small, had only two rooms and when the children were born it was broadened. The new rooms were made with the same original materials: wood, machimbre and veneer. The remodeling was performed tries to recreate the atmosphere of the time, keeping the heating system with salamanders and restoring the floors that are made of beech.

At the beginning of the century, the house was the only installed in front of the wharf of the local river, even it could be seen passing guanacos along the shore of the ria. In the warehouses of the house landed goods (mainly for the 2 stores of the era: La Anónima and Mercantil) and passengers. They did it in boats, since there was a spring. It was the nearest house to the beach, so from here the ships were sighted, the Menendez or the Asturiano entering the estuary once a month. 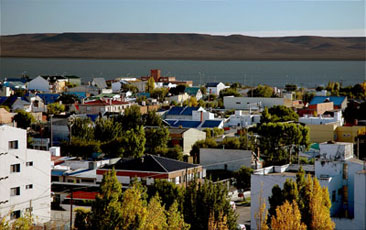 The city of Río Gallegos has many attractions, including historical monuments.

Paredes Grandma stood out to help others without expecting anything in return, one example was the fact that she constantly receive phone calls to find out "if had come or not such ship". The town of Río Gallegos wanted to pay it but Grandma objected and she was taken out the phone line, leaving Río Gallegos isolated. But she had a happy ending, as a few hours later they installed the phone line again because the same company needed her services and she was claimed by the entire village.

Furthermore, Grandma Paredes warned by phone to hotels so that they come and pick up the passengers. This was one of the first telephones installed in Río Gallegos. Isabel Paredes, provided an important service, guarding the mouth of the river with her binoculars and communicating regularly to prefecture ship arrivals and the news port.

The collaboration of Mr. Domingo Paredes and his family to the naval officers was of imperative need, and even the sailors were protected from inclement weather in this house.

Isabel Cerda de Paredes died on July 20, 1972 and by 1972 decree it was granted, without remuneration and for 99 years, the 423 municipal niche where her remains now rest. For her work and everything she did for the good of others, by Ordinance Decree 1216 of the municipality of Río Gallegos, it was called a passage under the name "Grandma Paredes" and Grandma Paredes' House was declared a "Historical Provincial Monument" in 1996.

Cape Vírgenes Nature Reserve From Río Gallegos you can visit Cape Vírgenes in Patagonia. This is one of the main colonies of Magellanic penguins on the coast of Argentina and it also has the distinction of being the southernmost point of continental Argentina and America.
City tour of Río Gallegos Rio Gallegos offers an organized city tour to visit its many beautiful places.
Magellanic Penguins Magellanic penguins (Spheniseus magellanicus) spotted by the first Europeans in Magellan's voyage in 1520 were described by the chronicler Antonio Pigafetta as "strang geese." It is one of the few flightless birds and their wings have become flippers in order to swim.
The Eduardo Minnicelli Atrs Museum On November 1st 1996 in the city of Río Gallegos oppened the Arts Museum "Eduardo Minnicelli". It is the first in the province and the southernmost in its specialty.
Argoturism: Hill Station tourist farm From Río Gallegos out by the National Route 3 heading east to reach Güer Aike after 27 km. From there continue on National Route 3 north 6 kilometers where there is a junction with Provincial Highway 55, gravel road that runs along the north bank of Gallegos river. Follow it about 30 km to the Hill Station.
What to do in Río Gallegos Río Gallegos is a strategic point of Patagonia. Visitors to the city can find many attractions to enjoy.
Stone Crosses in Patagonia A stone cross is a monument that is built and rised towards a homage or devotion. Usually they are religious and are located in public places, mainly in crosses at churches and roads. In Río Gallegos one was rosed to the memory of the founders of this town.
To Punta Loyola from Río Gallegos Punta Loyola is located 37 kilometers west from Río Gallegos and is the point where the Argentine sea joins the ria of Gallegos river. It is also the final point of the traditional National Route 40 that crosses Patagonia.
See all Articles