In Patagonia there are two major regions of valleys: the valley of Río Negro and the valley of the Chubut River, located in the provinces of homonymous names. 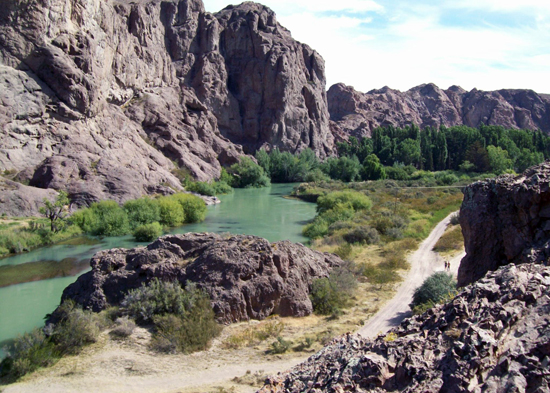 The valleys are depressions in the land down to a lake or sea carrying the waters of a river or ice from a glacier. There are two types of valley formations a U-shaped and other V-shaped. The latter are slightly younger reliefs molded by erosion that converge in a very narrow background.

While the U-shaped valleys, resulting from the passage of a glacier millions of years ago, have very steep walls with a concave bottom. As shown in the photograph on the Chubut River Valley.

The same happens on the other Great Valley of Patagonia, Río Negro Valley, where you can appreciate more visibility upstream by the proximity of the walls that enclose it. Already in the middle or lower down the valley is wider and we are so easy to spot the strings, but remains the same valley. This is seen in the cities of Chimpay, General Conesa, Choele Choel or already in the valley below.

Within the province of Neuquén are the two tributaries of the valley, the river Limay and Neuquén. Each one individually has the typical U shaped valley, which is observed in the towns of Plottier, Senillosa on the Limay River and Centenario, Vista Alegre, Cinco Saltos over Neuquén river.

The characteristic of being open plains in the cords or plateaus is a resource highly suitable for agricultural production. Therefore, in the valleys there are large plantations of different fruits or vegetables, such as large-scale production of apples and pears from the Upper Río Negro Valley.

Neuquén Capital: the largest city in Patagonia 1Neuquén is the capital city of the province with same name. It is the fastest growing city in Patagonia. It is notable for its commercial hierarchy, because of being center of the political, administrative and cultural movement of the region and for its lively nightlife.
The Central Park and the Av Argentina in Neuquén The center of the city of Neuquén is steeped in history and culture which can be observed in different buildings in the Central Park, the largest green space in the locality.
An Astronomical Observatory in the Patagonia The city of Neuquén offers another possibility to enjoy your stay in a different way, watching the sky. In the Astronomical Observatory you can observe the solar system and distant stars and galaxies.
UNCo Museum in Neuquén The Museum of the National University of Comahue in Neuquén has the first mechanical dinosaur from Argentina.
Neuquén also has its Craft Fair Neuquén Craft Fair is at the downtown of the capital of the province, on Avenida Argentina. With 120 stalls and street performers, the fair became a must visit for the weekend.
Neuquén's museums Neuquén city has several museums that you can visit and in which you can know the history, culture and palaeontological activity of the town and the region.
National Museum of Fine Arts in Neuquén The National Museum of Fine Arts of Neuquén is the only venue of itself outside Buenos Aires, which has important works of national and international artist, as well as part of its national heritage.
Summer in Neuquén In the city of Neuquén, there are four resorts where you can enjoy a beach day and also there is a Coast Tour which links the banks of the rivers Limay and Neuquén.
Historic-Cultural Center Paraje Confluencia The Historic-Cultural Center "Paraje Confluencia" is located in the city of Neuquén and is part of the monuments that recall the early settlers of the city. It also has samples of the peoples who inhabited the area 10,000 years ago.
Villa Regina: the Pearl of the Valley 2Known as the "Pearl of the Valley", Villa Regina offers places to visit, enjoy free time and parties that attract people from throughout the region.
See all Articles