They are famous throughout the country. And some even say they are the best. Red, juicy and glossy, Río Negro apples are already a registered trademark in the world of fruit. Of course their cultivation isn't in the entire province. Upper Río Negro Valley, an area of 100 kilometers between Neuquén and Chichinales which skirts the north of the watercourse is the privileged place from where these apples are.

The Río Negro Valley is an oasis in the middle of the Patagonian plateau. The geography of the province has lakes, mountains and forests on the west coast and cliffs in the east, but the rest is mostly plain and creosote bush. Large tracts of steppe dedicated to sheep farming. However, in the Negro River area, which cuts the north of the province, was built from the nineteenth century a true oasis that now produces perhaps the world's best apples.

In other areas of the river, down in Viedma and a half in  Choele Choel also produce fruit, but fruit area for excellence of the province is what is called the "Upper Valley". An area that with the rhythm of the seasons is changing color, dyeing yellow and orange in autumn, gentle green in summer, brown in winter and pink, white and green in spring when plants begin to flower. What is said, a true spectacle. 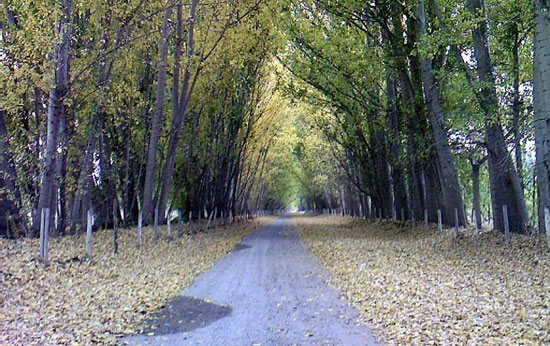 Fall in the "chacras". Photo courtesy of Yiyo Spina, in Patagonia.com.ar photo album

Began to fill after the railway arrived in 1899, but consolidation was from Ballester Dam construction in 1928, which helped ensure irrigation. So the towns were developed: Neuquén, Cipolletti, General Roca, Allen, Cinco Saltos, Cervantes, Ingeniero Huergo, Villa Regina. And is characterized by productive plots that are called "chacras."

The apple is the most cultivated, but also harvested pears, peaches, nectarines, walnuts, grapes. So much so that Río Negro is the largest producer and exporter of fruit seeds of the country. This process gives rise to an entire industry of related industries such as cider, juice, wine cellars, packing warehouses and jam factories. And therefore bring their relationship to the economy of the cities that make up the Upper Valley and the province in general.

Video courtesy of Turismo Neuquén, which also includes the wine route and the dinosaurs.

So far, this area caused astonishment among the visitors that by RN No. 22, saw how the desert was transformed suddenly into a fertile valley full of fruit and a blue plateaus or "bards" as they are called.

But there was no tourist circuit showing in full the entire production cycle and history of this region. Therefore, the Department of Culture of the Municipality of General Roca designed a complete tourist circuit to learn the history of the city and appreciate the productive-economic perfirl. "The wine and apple route" more than four hours of travel where travelers can appreciate the beauty of natural environment at the same time records the historical places where men left their step.

National Apple Festival 2Each february General Roca lives a new edition of the already famous National Apple Festival.
The irrigation channel and its parks The secondary irrigation canal runs through the center of General Roca, and the squares on its banks are the perfect site for hiking, hanging out with friends or just having a moment of relaxation.
Vuelta de la Manzana Rally "Vuelta de la Manzana" Rally is organize every year by the Drivers Association of General Roca (AVGR). Is one of the most important automotive events in Patagonia and in Argentina.
Museums in General Roca There are many museums in General Roca. They are good places to learn about history and art of the city.
Through the Negro River shores Throughout the coastal area of ​​Negro River there are places of great beauty for camping, water sports, fishing or recreation
Ninquihue Social Project for the children of the streets Project Ninquihue of General Roca is a project for the kids in the street. It tries to give them containment and a new way of living. In this project many institutions of the city and province join efforts.
Paragliding in General Roca, a look from the sky 3There are several people who practice paragliding in the hills near General Roca. Also you can take courses.
Night trekking: walking by the light of the moon in General Roca 3The night trekking in General Roca takes place once a month, when the moon is full, and is part of the "adventure ecotourism" project, offered by the city.
Casa de Piedra: a weekend option from General Roca The reservoir Casa de Piedra is located on the border between the provinces of La Pampa and Río Negro, along the Colorado River and 110 kilometers from General Roca. Ideal for a weekend of resting.
Patagonian Museum of Natural Science The Patagonian Museum of Natural Science in General Roca is a place where you can learn about the dinosaurs of Patagonia.
See all Articles