Each february General Roca lives a promising new edition of the already recognized National Apple Festival. It has a repertoire of national and regional artists, the classic game of packers and the weigh up of the apple, and the many stands that displayed their products or promote their business. 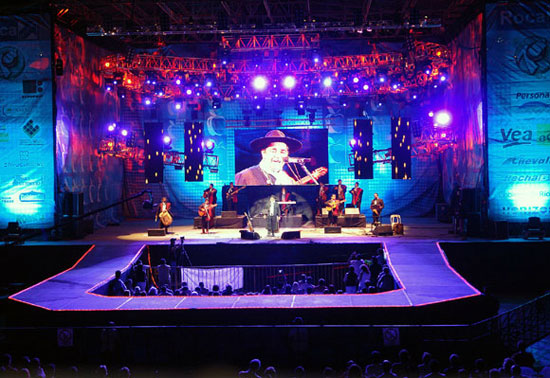 The main stage in which national and international artists performed.

This event is celebrated since 1964, when it is officially established the Apple Festival by Provincial Law No. 360, and in March 23, 1966, by decree of the Executive, is given national character to the festival and is set to host in General Roca. 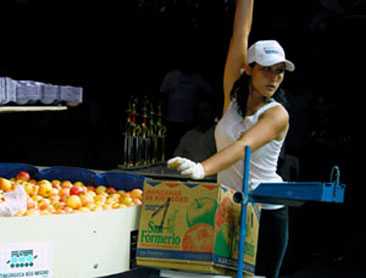 The packers game has a lot of participants.

For a couple of years the organization of the festival has decided to split on different nights the performances of the regional and national figures that are on stage located at the side of National Road No. 22.

This way you can enjoy, for example (always depending on the artists of every year), a teen night, tropical night, a rocker night, a night of remembrance, a party night, a romantic night and night closure which also is the familiar spectacle of fireworks.

The festival schedule begins the Friday before with the Gala Dinner at a renowned and historical disco, with a menu of luxury and performance of a musical group. And the following weekend is disputed the Tetra of the Apple to crown the feast.

More information: manzana@generalroca.gob.ar  and in the official site of the festival http://fiestanacionaldelamanzana.blogspot.com/

The irrigation channel and its parks The secondary irrigation canal runs through the center of General Roca, and the squares on its banks are the perfect site for hiking, hanging out with friends or just having a moment of relaxation.
Vuelta de la Manzana Rally "Vuelta de la Manzana" Rally is organize every year by the Drivers Association of General Roca (AVGR). Is one of the most important automotive events in Patagonia and in Argentina.
Museums in General Roca There are many museums in General Roca. They are good places to learn about history and art of the city.
Through the Negro River shores Throughout the coastal area of ​​Negro River there are places of great beauty for camping, water sports, fishing or recreation
Ninquihue Social Project for the children of the streets Project Ninquihue of General Roca is a project for the kids in the street. It tries to give them containment and a new way of living. In this project many institutions of the city and province join efforts.
Paragliding in General Roca, a look from the sky 3There are several people who practice paragliding in the hills near General Roca. Also you can take courses.
Night trekking: walking by the light of the moon in General Roca 3The night trekking in General Roca takes place once a month, when the moon is full, and is part of the "adventure ecotourism" project, offered by the city.
Casa de Piedra: a weekend option from General Roca The reservoir Casa de Piedra is located on the border between the provinces of La Pampa and Río Negro, along the Colorado River and 110 kilometers from General Roca. Ideal for a weekend of resting.
The apple route A tourist circuit to learn about fruit production, the colorful surroundings of General Roca and its history through visits to barns, farms, wineries, museums and monuments.
Patagonian Museum of Natural Science The Patagonian Museum of Natural Science in General Roca is a place where you can learn about the dinosaurs of Patagonia.
See all Articles